Last season, Battier took over 60% of his threes from the corners and hit at an above average rate from both sides. This season, his percentage of corner 3s attempted has dropped to 46% and his accuracy has dropped from every spot except right at the rim, where he saunters to once in a blue moon. Now, his corner proficiency hasn't plummeted the way Ray Allen has from the left corner, but he's dropped about 7 to 8 percentage points from both corners and his aim from the key has left quite a bit to be desired. Per SportVU, Shane's catch and shoot percentage currently sits at 35.7%, which, considering his overall 3 point percentage is currently 34.4%, tells you how much he relies on others to find him open.

Battier is tricky to analyze as a jump shooter, if only because his hot and cold streaks can be so drastic and can last for weeks on end. Last regular season Shane was an overall 43% marksman from beyond the arc, but his playoff shot chart tells another tale. 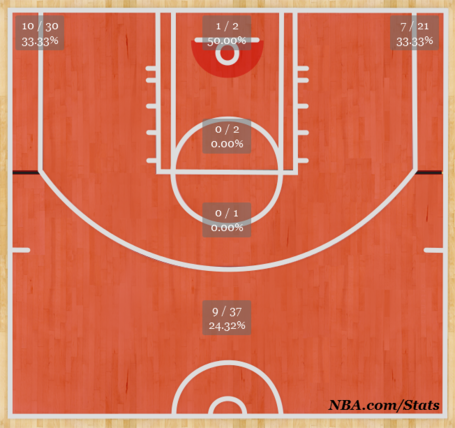 AHHHHHHH! SO MUCH BLOOD!

But your Miami Heat do not hoist the Larry O'Brien trophy if not for Battier going 6-8 from downtown during a tightly contested Game 7.

Erik Spoelstra trusts Shane Battier like few others on the roster and the Heat have learned to deal with his slumps over time in part because of how he still impacts the game. According to Danny Martinez of Heat.com (@DannyMartinez4) the Heat are "throttling teams with Shane on the court." The Heat are +10.5 per 100 possession on the season with him on the floor, meaning his impact is felt whether or not he's making his perimeter jumper (seriously, go watch the defense he played on Durant a month ago. Masterful).

So as much as Battier's ineffectiveness in hitting open shots can frustrate at times, his history shows that he always bounces back to his career norms (rather drastically I might add) and he has come through for the team in multiple ways the past two postseasons. Shane is a career 38% shooter from beyond the arc and if you believe in the Law of Averages, it's better he gets this poor stretch out of the way now rather than deal with it in the playoffs as the Heat experienced most of last postseason. A player as cerebral as Shane impacts the game like few I've ever witnessed without actually accruing many raw statistics and if this is truly his last season as he has hinted at in the past, we should really come to appreciate and understand the contributions and sacrifices he has made by joining this franchise.