A detailed look at how Chris Bosh's long range shooting is coming along this NBA season.

Share All sharing options for: From Downtown: Chris Bosh

We conclude "From Downtown" by looking at Chris Bosh, one of the most improved 3 point shooters in the NBA.

With only the slightest dip from midrange and right around the rim, Chris Bosh has been a model of efficiency from nearly every spot on the floor, having made significant gains from beyond the arc. Shooting a career high 37.4% overall from 3, Bosh has redistributed some midrange attempts in favor of more above the break and wing 3 pointers. He already has 114 attempts from that area compared to 32 all of last season. As a result of this addition to his game, Bosh sports a career high eFG% and TS% (57% & 61.5%, respectively). Through most of last season, Chris Bosh's long range heaves left many questioning him and Miami for giving him permission to shoot from there as he shot a paltry 28%, but rather than abandon the shot, it became even more important during last year's postseason run. 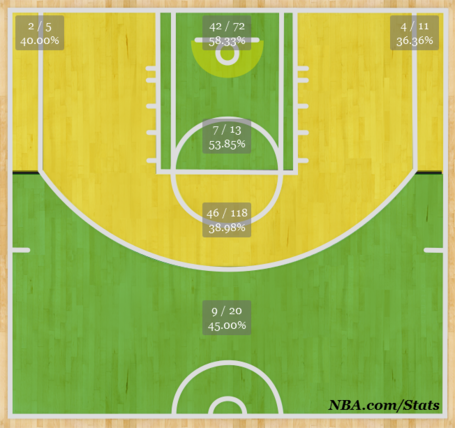 Bosh shot over 40% from 3 last postseason, but his attempts varied by matchup (16 threes attempted vs. Indiana. 2 threes vs. San Antonio after game 1) as well as the fact that he started alongside Udonis Haslem, a mostly limited threat from the perimeter at this stage of his career, up until the Finals where Mike Miller (miss you!) was inserted. This season, he's mostly started with Shane Battier (who you can read about here), but has also played more minutes with Chris "Birdman" Andersen and Greg Oden, permutations that weren't seen much last year. With the floor now better spaced, Miami can afford to play one non-shooter whereas in the past, the Chris Bosh/Joel Anthony lineups suffered through spacing issues.

While it's still a small sample, the attempted 3s when these two share the court has shot up and their +/- is now a positive rather than a negative. This added flexibility allows Coach Spoelstra to better matchup to opponents and not wear down Bosh and Battier having to always guard larger players.

In closing, I'm going to conclude with perhaps my favorite stat that I've been able to dig up through writing this series. Thanks to NBA.com/stats "clutch" shooting data, we can quantify how reliable Chris Bosh has been late in games. Per NBA.com, in the last 5 minutes of a game, with a point differential of 5 or less between the two teams playing, Chris Bosh is 11/20 on 3 point attempts. For comparison's sake, LeBron James is 8 of 27 in these situations (29.6%).

I'd like to thank each and every one who took the time to read "From Downtown." The 3 point shot remains an essential part of Miami's identity and hopefully the players who have underperformed are able to turn it around for this stretch run. I leave you all with this. #BigShotBosh.