Since LeBron's 61 point masterpiece, many have noticed his play has been a tad off late in games. I decided to take a closer look at his eight games since the franchise record outing.

Share All sharing options for: A closer look at LeBron James' recent struggles in the fourth quarter

Many have talked about the "Curse of the 61 point game" in response to LeBron James' subpar play since the amazing night he had against the Bobcats.

Now, keep in mind subpar for LeBron is 23.5 PPG, 6.4 APG & 5.0 RPB on 49.3% shooting from the field over the eight games since that night, and yesterday he exploded for 43 points versus the hapless Cleveland Cavaliers. But even in that game, LeBron was held without a field goal in the fourth quarter, getting six points all at the foul line to seal the game when the Cavs were forced to foul.

These low fourth quarter totals in points and field goals for LeBron left some questioning if Dwyane Wade's return to peak form has thrown LeBron off his rhythm with Wade assuming more ball handling responsibilities late but he did not play on Tuesday due to maintenance and the same issues persisted, with Chris Bosh instead stepping up in the fourth, scoring 12 of his 21 points.

Thanks to NBA.com/stats we can take this sample of 8 games and dig deeper. 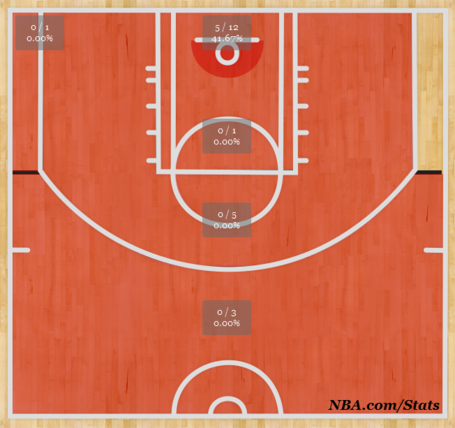 Yikes, that is pretty bad. LeBron hasn't made a single jumper in the fourth quarter in over two weeks. Now, this can be brushed aside as all jump shooters go through peaks and valleys and LeBron is no different. What has caught my eye over these two weeks is LeBron's inability to finish at the rim. 5/13 for a paltry 41% is a far cry from his league leading mark of 78.5% for the season. However, during this same eight game span, LeBron has been consistent with his league leading mark at the rim, shooting 78.38% in the first halves of games. 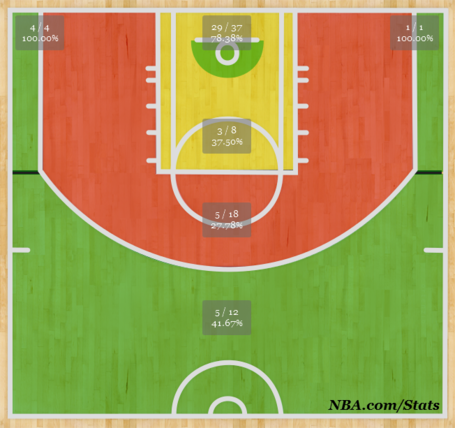 Other than the midrange game, LeBron's been excellent from both 3 and at the rim at the start of these games. There is a pattern of him tapering off in the fourth quarters of these games and we can only speculate as to why this is. Perhaps the broken nose or some other lingering injury continues to be an issue late for whatever reason or maybe it's just midseason fatigue. To be fair to LeBron last night, the Cavs were throwing double teams at him rather vigorously after his incredible 25 point first quarter and he did his job at the foul line as Jarrett Jack was threatening to go all Paul Millsap on Miami late.
Hopefully this is just a blip on the radar for LeBron James and if Tuesday's game is a sign, he should be rounding into form and breaking out of this mini funk pretty soon.