LeBron played one of his worst games of the season in the narrow win vs. Memphis, but it seems he may have bucked a recent trend that had plagued him.

I had previously detailed at length (you can read it here) LeBron James' recent stretch of 4th quarters where he had performed statistically poorly. This trend has gone through most of March following his 61 point game vs. the Charlotte Bobcats and what's peculiar about it is that LeBron has performed within his averages and percentages for the first halves of these same games.

Tonight was different however. Tonight LeBron went up against the team tied for #1 in defensive efficiency since January 14 following the return of former All-Star and reigning Defensive Player of The Year Marc Gasol (who admittedly left the game in the 3rd quarter) and for most of the game, he was passive, seemingly lacking consistent explosion and deferring a bit too much to teammates. It was known that LeBron was dealing with back spasms, that led him to miss Wednesday night's loss to the Boston Celtics, and maybe he should've just taken another night off. Instead, he found his team in the midst of a ragged 4th quarter battle where at one point Miami was down 7 while Memphis had the ball. Following a Mike Miller miss (Heat mole!), LeBron finally got going.

This was LeBron's only assist of the quarter (he finished with 7), but it trimmed a sizable 7 point hole into a 4 point deficit. Now, the assist was nice, but LeBron's issues were with scoring, not passing, so let's examine his 4th quarter shot chart. 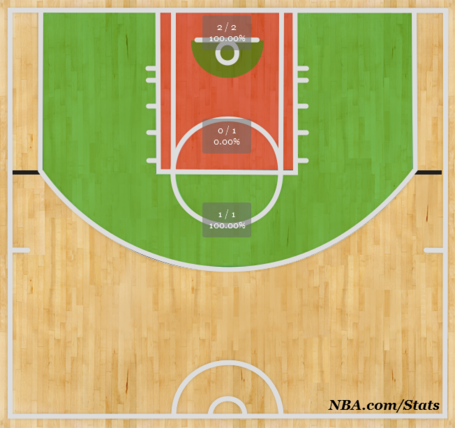 Following another Memphis miss, LeBron took it straight to the rack to bring the game to 84-82. After 4 hard earned points from Dwyane Wade, Miami clung to a 2 point lead with a little under 50 seconds left. If you've read my prior article you know that LeBron hadn't made a single 4th quarter perimeter jumpshot in this 8 game span. Well, that ignominious streak ended with LeBron iso'ing at the top of the key with the shorter Courtney Lee defending, allowing him to pull up for a jumper that hit nothing but net to make it a 4 point game (watch the two plays here). Miami would go on to win a game they had to scratch and claw their way to fight back in. LeBron ended his 4th quarter with 7 points, 2 rebounds, the Ray Allen assist, and 2 steals.

Against one of the top defenses in the league, LeBron took command and closed out a game vs. a playoff-bound Grizzlies club. That he was able to play his game late bodes well for his future prospects.