Despite his inconsistencies, Beasley has the potential to be an extremely solid role player for the Heat, and with the rotation in disarray this might be the time for Spoelstra to start looking in Michael's direction.

Share All sharing options for: Should Michael Beasley be seeing more playing time?

The signing of NBA problem child, Michael Beasley during the NBA off-season certainly surprised many. Despite initial reactions of doubt Beasley has become a solid role player in spite of his wildly inconsistent season.

Firstly, it has to be said, judging by trends in Beasley's stat lines, that he'll never reach the potential that was thrust upon him during his time at Kansas State. He's averaging his lowest ever points per game with Miami this season, however a lot of that comes from lack of playing time. Regardless, coach Erik Spoelstra had been giving Beasley more minutes seemingly looking for an area in which he could star in the rotation and as a result Beasley was more consistent.

The 6'10 25 year old has averaged 8.3 points, and 3.3 rebound a game for the Heat this season. After starting the season hot averaging 11 points and 4 rebounds in just 20 minutes of play Beasley cooled off quickly, and as a result a decline of playing time was a consequence. In the Heat's last five games Beasley has only played in three contests with two being (DNP-CD). With Spoelstra's rotation in a constant flux it's difficult to see how Beasley could be a legitimate force, but there is always hope.

Beasley provides a spark off the bench that is much needed, especially when Miami is struggling. His instant scoring aids them in various dilemmas, but his poor decision making at times hinders them as well. However, it's worth noting that Beasley has adapted to the offense well as made evident by the fact that he's averaging career highs in various categories. It's also important to note that Beasley's consistency as a shooter is extremely solid. He's shooting 43% from beyond the arc (better than Ray Allen), and 60% in the paint. 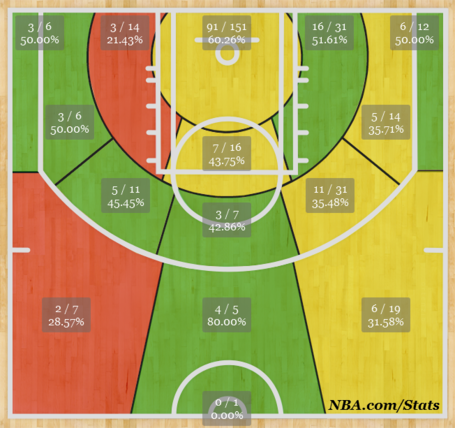 The fact of the matter is, judging by numbers and physical capability there is no reason Beasley should not be finding time on the hardwood. He's been ultimately used as a LeBron replacement when injuries befall the King.

Many of the Miami's role players have suffered season lows, and as a result the rotation has fallen apart. With less than 15 games left in the regular season, now is the time to be grooming Beasley for the playoffs. The Heat should be looking to rest LeBron James at this time, and that would ensure minutes for Beasley.

Michael Beasley is more than capable of helping the Miami squadron, his numbers prove that, he just needs to be given consistent minutes to prove that to the coaching staff, and that needs to happen now.