Thanks to a twitter campaign with over 20,000 tweets and retweets, LeBron James was able to meet a very special fan in Milwaukee.

Share All sharing options for: LeBron meets Ebony at the HEAT vs Bucks game thanks to Twitter

It happened and it was perfect!
On Saturday night, LeBron James met Ebony Nettles-Bey, a 16-year-old junior at Verona High School in Milwaukee, Wisconsin who was diagnosed stage four cancer back in October 2013. Her friends and classmates started a twitter campaign in early February 2014 using #LeBronMeetEbony with hopes of getting LeBron to meet Ebony to brighten up her life and make a dream come true. It worked!

In this YouTube clip posted by a classmate back in February, you can see how it all started:

Rick Reilly from ESPN wrote a compelling piece that explained who Ebony is, her story, her greatness and her being blindsided by the cancer diagnosis last fall. He went on to explain to LeBron at length, "Ebony is worth meeting." She absolutely was. When LeBron met Ebony she was over-the-moon with excitement, but she could not have predicted the great lengths LeBron went to in order to make her feel special.

Ebony stood in the pre-game huddle and then got to lead the Miami HEAT onto the court. She warmed up with LeBron before the game. She stood with him during the National Anthem. She sat courtside and watched LeBron James, her idol, play in shoes that had written in silver marker, "#CancerWho" and "Ebony = Strong." At the end of the game, LeBron took off his shoes and autographed them to Ebony. He even took off his jersey and gave it to her. Then, he threw his headband into the pile, too. Her smile? It was huge. She was so surprised. 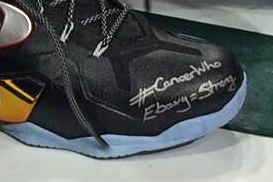 At the end of the evening, LeBron James posted the following on Instagram:

Tonight I had the privilege of meeting and making someone's dream come [true.] Basketball has put me in position that I will never take for granted. Being a hero to this girl Ebony is the reason that I keep going every single day! She was diagnosed with stage 4 cancer out of nowhere towards the end of last year and force her to be home schooled and away from her friends. But didn't stop her from doing what she loves more than anything and that's playing basketball at Verona High outside of Milwaukee. Ebony your strength, courage and energy is out of this world and u will win and defeat this. I just know it! Love you forever and I got your back and front! #EbonyMetLeBron #CancerWho #EbonyEqualsStrong #StriveForGreatness

It was an emotional victory for everyone who had been involved in the twitter campaign, every friend and every on-looker. With over 20,000 people involved, Twitter was abuzz with emotion and gratitude for LeBron James. And from back in February, even the most cynical tweet was answered:

Once again, a kind-hearted gesture by King James did more than brighten the life of an incredible young woman. It showed the world that we can use social media to be powerful, to spread goodness and to help. Truth be told, it makes our hearts sing. And it makes us proud of our team.

Thank you, LeBron! You're a good man. 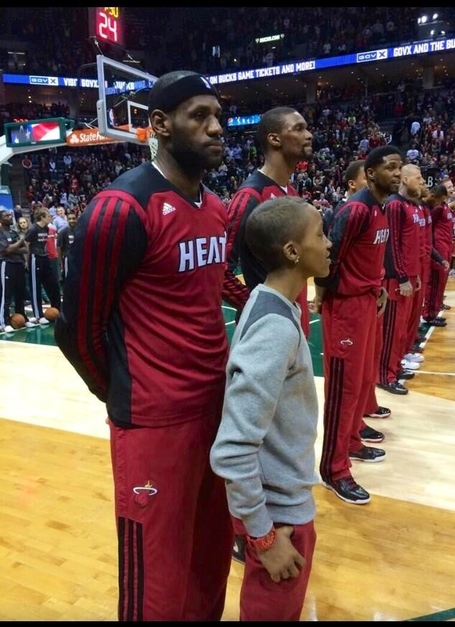