LeBron James may be getting all the accolades lately but meanwhile, Dwyane Wade is putting together a stunningly efficient season.

Share All sharing options for: The numbers behind Dwyane Wade's incredible season

It feels strange classifying five straight 20+ point performances as an "offensive explosion" for a guy who once averaged more than 30 points in a season, but here we are.

Wade is currently putting together one of his most impressive seasons to date, while averaging the second lowest points per game of his career at 19.0.

His field goal percentage has improved in each of the last three seasons, and is up to an astounding 55.5% for the season, which ranks him 6th in the NBA among qualified players. Some may be quick to point to Wade's decreasing shot attempts and limited minutes as a reason for this, but that isn't the case.

On November 15th, just 9 games in to the season, I wrote about how Wade's numbers were due for an increase, as he had performing poorly from in the paint, an area where he had typically thrived. Wade was shooting just 63% at the rim, his second worst mark as a pro, and 35.29% from inside the paint but outside the restricted area, which was a career low.

Now, 58 games in to the season, Wade's shot chart (below) looks completely different. I mentioned in November that Wade was shooting a career high 48% from the midrange, but that number was certain to decline. It did decline, but he is still shooting a career with 44% from that area. If Wade keeps up that production for the rest of the season and in to the playoffs, it bodes incredibly well for Miami's title chances. As for his interior struggles? Those are long gone. Wade is up to 68% at the rim and 56% from inside the paint, which represents a career high. 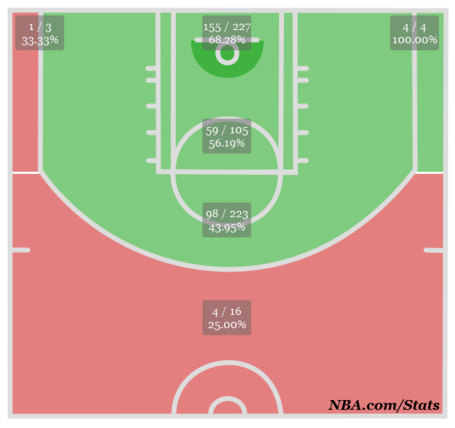 One of Wade's most impressive skills as a basketball player is his ability to score in 1 on 1 situations. He can score in a variety of ways, whether it be taking his man off the dribble or backing them down in the post. In the past, the smart way to defend Wade was to bait him in to midrange jump shots and keep him away from the rim, where he's one of the league's best finishers. If this season's current trend holds up, that strategy is no longer valid.

Not only is Wade's FG% from the midrange significantly higher than at any other point in his career, he's also taking more shots from that area. His shot distribution (below) shows that Wade has taken 38.58% of his shots from the midrange this season, versus 33.85% last season. Assuming that Wade keeps up this pace, defenses will be forced to play tighter on him, which should allow him to blow by defenders or draw fouls, which opens up a variety of other options for the Heat on offense. 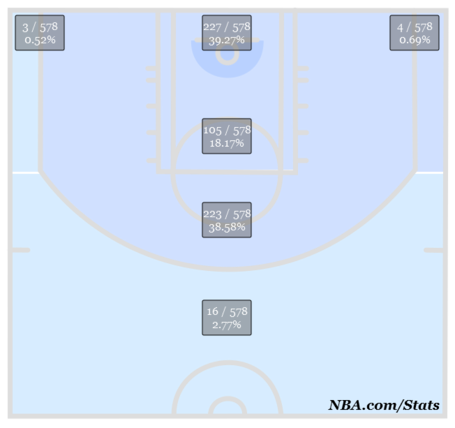 Many people have been critical of the way the Heat have handled Dwyane Wade this season - he has already sat in 16 of a possible 58 games, the majority of which have been for precautionary reasons - but if the results are any indication, Miami's plan is working just fine.