Andersen, at the ripe old age of 35 has never looked better in his NBA career. What he offers Miami night in and night out is invaluable.

Share All sharing options for: A case for Chris "Birdman" Andersen as the 6th Man of the Year

On January 20th, 2013 the Miami Heat were sitting idle at a 26-12 record, having a rare 5 day gap in between games. Miami began it's title defense nearly 3 months prior, and were playing solid, if sometimes unspectacular basketball, not unlike what Miami is currently going through.

Waived last July by the Denver Nuggets with the use of their amnesty provision, Chris "Birdman" Andersen was unemployed, and dealing with a shady and potentially crippling legal situation. Thankfully, Andersen was later found completely innocent (no charges were filed) and the Miami Heat offered Andersen a scant 10-day contract to him on that day.

Miami has gone through a veritable recycle bin of limited big men in the past, who struggled due to age, injury, or limited skills. Zydrunas Ilgauskas, Erick Dampier, Ronny Turiaf, Dexter Pittman, Eddy Curry. None proved to be an answer in the middle (Sidenote: I don't wanna put lovable Ronny with that bunch. He can play). Andersen's signing was brushed aside as another desperate novelty move for the undersized Miami frontcourt. Big men do not age well in the NBA, especially bigs who's abilities lie in their leaping ability like Andersen's do. Miami soon learned, however, that there was still plenty of flight in the soaring wings of The Birdman.

Miami won their next game vs. Toronto, then reeled off 26 more victories as Andersen was quickly integrated into the rotation and regained his conditioning while also being given a season-long prorated veterans minimum once Miami saw what they had in him. Miami went a staggering 38-4 with Andersen and went on to win the NBA Championship. Andersen, in particular, set a postseason record for FG%, a mind-boggling 80.7% from the field.

How did Andersen follow that up? Well he is currently in the midst of an incredible season for Miami. His boxscore averages currently sit at 6.8 PPG, a career high 66.3% from the field, and a tidy 70% from the foul line as well. Per Basketball-Reference, only Tyson Chandler, Brandan Wright, and NBA Hall of Famer Artis Gilmore have ever reached those marks (link). Furthermore, Andersen adds 5.2 RPG and 1.4 BPG in only 19 "open throttle" minutes per game. 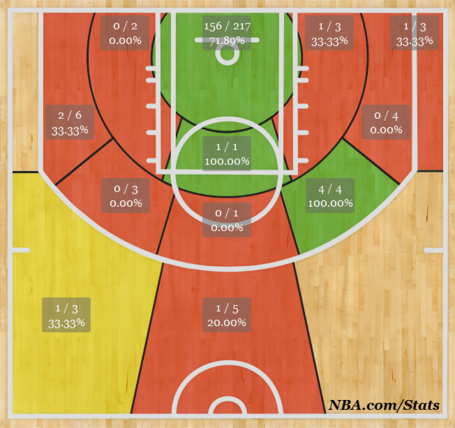 The Birdman shoots an astonishing 71.9% at the rim, often flushing lobs, running pick & roll, and cleaning up misses for Miami. 86% of his shot attempts come right at the rim, a wayward jumper occasionally plaguing an otherwise sterling conversion rate (he's hoisted 44 jumpers this year compared to 19 last year according to NBA.com). A full list of his shot attempts can be found here. 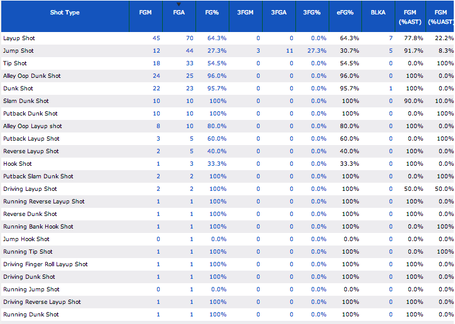 I could regurgitate more stats to show how Chris Andersen impacts both ends of the floor, but numbers or no, he has been Miami's most consistent reserve, arguably even the most consistent overall player on the team. He has played under 10 minutes only once this year and only over 30 minutes twice. His role is probably the most secure on the entire roster. As the starting lineup and bench rotations continue to get reshuffled, Andersen has always been the first big man off the bench, playing his absolute heart out and energizing the home crowd with his soaring theatrics. You never feel disappointed when Miami's backup center is coming in to replace Chris Bosh or Udonis Haslem. When is the last time anyone could claim that? Alonzo Mourning backing up Shaquille O'Neal in 2006 perhaps, but it's an amazing luxury Miami is afforded when considering the sloth-like orcs Miami used to try to survive with for 15 minutes.

The only player to win 6th Man of the Year within Andersen's averages would be Hall of Famer Bill Walton, who won the award in 1986 averaging 7.6 PPG, 6.8 RPG, and 1.3 BPG on 56% shooting while playing 19.3 minutes per game. Most of the award winners are high volume scorers and creators who, despite their bench roles, end up playing starters minutes, so it would be quite a shock if Andersen even finished in the top 5 in voting this season. Award or no, Birdman's impact is felt whenever his talons step claw onto the hardwood. He's one of Miami's most impactful players on both ends and to this day, 28 other GMs are kicking themselves for not giving him a chance.