Note to Self – Dwyane Wade is Back

After a season-long “maintenance program” that had media and fans ready to drive the final nail into the coffin of his career, Dwyane Wade’s first game in this year’s playoffs confirmed, to paraphrase author Mark Twain, that rumors of his death have been greatly exaggerated.

Share All sharing options for: Note to Self – Dwyane Wade is Back

It's been an underlying theme all season long, undermining Miami's historical quest for a third-straight championship: Dwyane Wade, one of the top shooting guards in NBA history, is simply a shadow of his former self.

He can't explode and is no longer a factor. He's forcing the end of the "Big Three" era. The team plays better without him.

Well, it might be time to rewrite the narrative once more.

Wade turned in an exceptional performance against the Bobcats in Sunday's win, proving that he is as dependable as ever. To quote a joyful LeBron James after the game, he "can't get no righter!"

Critics and skeptics will be quick to point out it was only one game, the first of what the Heat hope will be 16 postseason victories. That is certainly true. But any player can be laid low by injury - Chicago's Derrick Rose might never again reach MVP-type levels of athleticism and Charlotte's slim playoff hopes were torn along with the bottom of Al Jefferson's foot.

But only Wade has been so consistently and publicly dismissed that even his best moments are considered the exception and not the norm.

Yet, his outing shows otherwise. Looking at the game's highlights, it's clear that Wade is doing exactly what he's always done throughout his career. Nailing the mid-range jumper. Finishing in traffic. Working the low-post. He even mixed it up with a rare - but perfectly in-rhythm - 3-point shot.

Here's the video to prove the point:

I'll admit there was one thing missing from the game; Wade's patented up-fake. You know the one. It's that bit of veteran-savvy that, as NBA analyst Jeff Van Gundy points out during every Heat broadcast, still successfully gets defenders to jump in the air like fools after 10-plus seasons.

He scored 23 points on Sunday the way he always has; efficiently and from everywhere on the court. Below are two shot charts to back this up...this one: 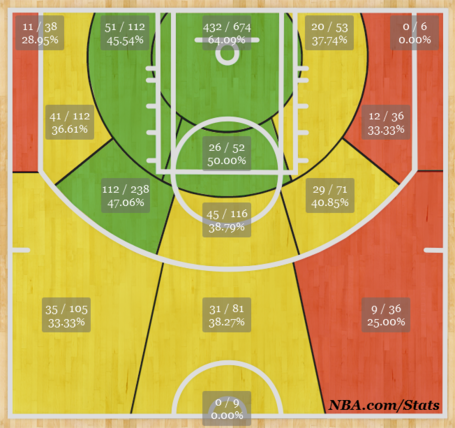 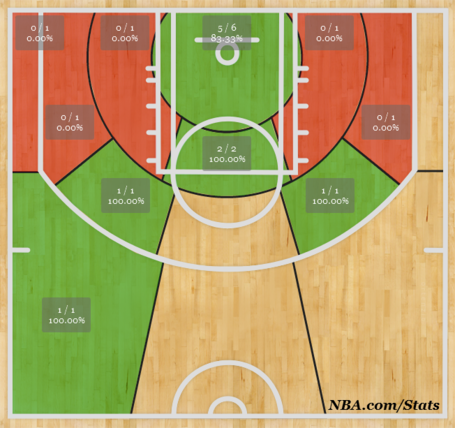 The first is a season-long chart from 2008-2009, the year in which Wade scored over 30 points per game and was part of the MVP discussion (he lost to another decent player...some guy from Cleveland). The second is from yesterday's game.

They're both similar enough to show that Wade scores in preferred areas - his sweet spots - but the chart from the Bobcats game shows he's only gotten better. And that's the case for the whole season: 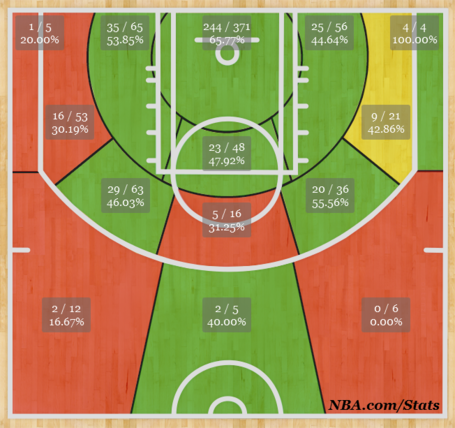 Eerily familiar, isn't it? For a guy who's no longer a factor and can't contribute, he sure produces at a high level and more efficiently than ever before.

It reminds me of comments that came from another MVP contender over at Oklahoma City. You might remember Kevin Durant's statement that Dwyane Wade was no longer deserving a spot in Sports Illustrated's list of the top 10 players in the NBA. Refresh your memory with this:

More stats from yesterday's first games in the NBA playoffs: 27 points on 8-of-28 shooting, including an anemic 3-of-14 from beyond the arc. That stat line is Harden's, in his game versus the Portland Trail Blazers.

Perhaps the more important number is one, as in a victory for Wade and a loss for Harden's Rockets.

It will (hopefully) be a long postseason and a lot can happen. But to those members of the media who seem to take a certain pleasure in selling short Wade's contributions...maybe it's time to find a new angle.

Or you can just follow the advice that Wade offered Durant, especially since only one of the two future Hall-of-Famers wears a ring that reads, "2012 NBA Champions." 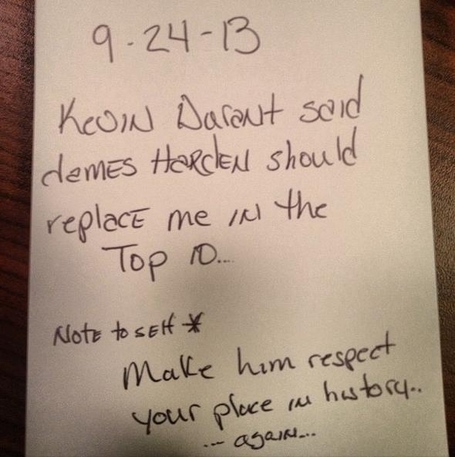 No worries, Dwyane. Down in Wade County, we remember you very well.