Dwyane Wade goes one on one with author James Patterson

For the second time, Dwyane Wade will join forces with #1 bestselling author James Patterson to highlight the importance of reading for success in life. This year, he's getting a little help from his All-Star friends.

Share All sharing options for: Dwyane Wade goes one on one with author James Patterson

With playoffs underway in the NBA and FCAT week in progress for Florida students, Dwyane Wade is going "One on One" with #1 bestselling author James Patterson this week reminding us that life is bigger than basketball and reading can change lives. It's the second time the two have joined forces in this effort to raise awareness and save lives through reading. This time they will be joined by NBA All-Stars LeBron James, Dirk Nowitzki, Terrence Ross and Stephen Curry.

James Patterson is an All-Star in the literary world. You can barely scroll through a New York Times Best-Seller list or walk past an airport gift shop without seeing his name. After writing volumes of books for adults, Patterson got into writing children's book when he noticed his own son, Jack, "didn't exactly love books." On his foundation's webpage (ReadKiddoRead.com) Patterson says, "Jack got me writing books that I thought other kids would love. To contribute a few books that hopefully, will make kids readers for life."  His "Middle School" books are a big hit with the younger crowd.

The NBA All-Star guests will share their thoughts on how reading has helped them achieve tremendous goals on and off the court while Wade and Patterson will be highlighted in an in-depth conversation hosted by Mr. Ascot Friday himself, Jason Jackson. Jackson is a six-time Emmy Award winner and the Miami Heat's courtside reporter. In addition, Patterson and his publisher Hachette Book Group will make a major donation of books in conjunction with the webcast.

"Dwyane Wade & James Patterson One on One: All-Star Edition" will air on Thursday, April 25th, 2014 at 1pm ET on JamesPattersonEvents.com.  Schools, libraries and home viewers are encouraged to sign up in advance to watch and the webcast is free of charge. International viewers are welcomed, too. 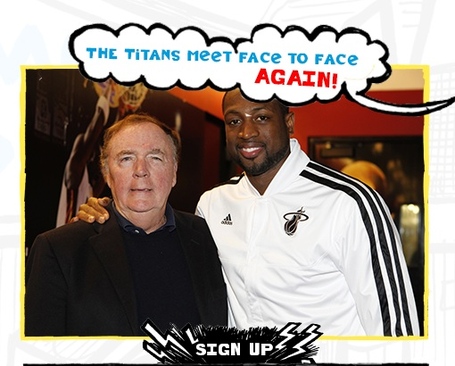 "Dwyane and I agree on this: getting kids reading will save their lives, especially those at-risk," James Patterson said. "That’s why we’ll be visiting (by webcast) as many schools as will have us. Dwyane and I are shooting for 100% literacy in our schools." -ReadKiddoRead.com