Miami's Mastermind is a true fan of the HEAT

When it comes to a true celebrity fan of his NBA team, Rick Ross keeps it real.

Share All sharing options for: Miami's Mastermind is a true fan of the HEAT

While we love the new era of hip hop and rap here at HHH, last night's footage of rapper Drake lint-rolling his pants (he didn't even start from the bottom) while court side as fellow Canadian Justin Bieber chose to wear a Brooklyn Nets cap in Tokyo reminded me that the Heat's own rap ambassador is the realist of them all.

There's nothing fake about NBA fan Rick Ross, who grew up in Miami and has been representing the Heat in songs since his debut album Port of Miami launched in 2006 so join us with our ode to the one known as "Rozay". 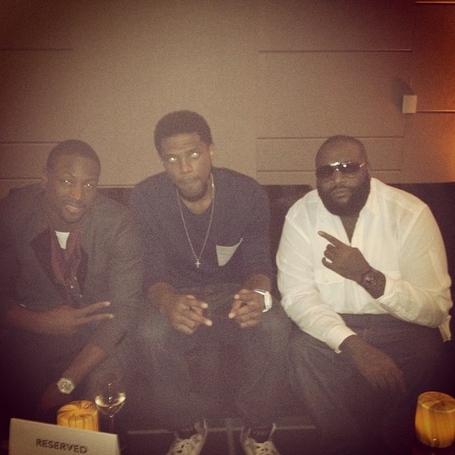 With lines like "Miami's mine like I'm Pat Riley" to "Floor seats at the Heat game", Ross has intertwinted his love for the Heat into his main passion - his music. Growing up in Miami's Carol City, Ross has devleoped mutual respect with local Udonis Halsem and just on Sunday tweeted how happy he was to see UD start Game 1 against the Charlotte Bobcats.

Former coach and Heat broadcaster Tony Fiorentino even coached Ross's son, William, in a basketball camp last summer. "He was a great kid! He has some natural talent", The Coach was heard to say after spending the day with William while his father proudly looked on.

In Round 2 of the playoffs last year, Maybach Music Group or MMG, documented Ross attending the game with his son in this short clip, here you can even see Dywayne Wade giving the shoes he wore to an excited William.

And here he is again in 2012 for game 5 of the playoffs against the Knicks. With courtside for as much as $20,000, Ross could by now own a share in his beloved team and if that's not enough, he's even referred to himself as "Ricky Arison" this season.

Even Kelly, daughter of owner Micky Arison, has given the love back to Ross.

Toronto have their Lint Rolling rapper, Brooklyn, a rapper that gave up on ownership a year later. Miami however? The real deal.

We can't wait to continue seeing Miami's own Mastermind continue representing the Heat on the rap/world stage through these playoffs.

Follow Rick Ross on twiiter @rickyrozay or find him at a his restaurant @wingstop.