The Breaks of the Heart – Saying Goodbye to Dr. Jack Ramsay

Dr. Jack Ramsay, Hall-of-Fame NBA Coach and Miami Heat broadcaster, passed away at the age of 89 this weekend. Hot Hot Hoops looks back at his career and his influence on a generation of South Florida basketball fans.

Share All sharing options for: The Breaks of the Heart – Saying Goodbye to Dr. Jack Ramsay

In 1992, I barely knew a damn thing about basketball but I knew that I liked Dr. Jack Ramsay.

Living in South Florida and growing up overweight in a city without much of a traditional basketball culture, it was easy to focus on the local gridiron greats in the NFL and at "The U" while ignoring the unproven Miami Heat.

But the team was making progress and I felt that I should be a part of it because Ramsay, the color commentator for the Heat from 1992-2002, told me so. He made basketball more interesting than it had been, explaining nuances of the game for those of us that were completely ignorant. And he did it a pleasant way, in the role of the venerable grandfather sharing stories in a soothing voice, an oratory treasure box buried deep in basketball history.

When his great broadcasting partner, Eric Reid, called him "Dr. Jack," I thought it was more of a nickname, a playful inside joke between friends. I found out later that Ramsay was indeed a doctor, having received his degree in education from the University of Pennsylvania in 1963. There was so much about him that I, a hoops neophyte, didn't know.

His decades of coaching at both the collegiate and professional levels. His innovative techniques in preparing players physically and mentally to handle the rigors of the game. His championship and Hall-of-Fame pedigree.

Some of these aspects I discovered by reading about basketball, a love I eventually developed that was in no small part inspired by Ramsay.

Others I learned organically over the years, just as one does with a family member. You saw who he really was when he exchanged stories on-air (always with Reid, still the dynamic play-by-play voice of the Heat), like those you'd hear at birthdays, holiday meals and other gatherings.

And just like when any other family member leaves us and takes the next step, whatever it may be, those of us left behind recall those spun yarns as we grieve, as good memories become honest smiles even through the tears.

Learning about Ramsay's life is almost like taking a trip through the Basketball Hall of Fame, only the walls are wallpapered in plaid and the staff is all unusually fit.

He began coaching in 1948, fresh off a stint in the Navy where he had trained for a Japanese invasion that was never needed, following the bombings in Hiroshima and Nagasaki. Like so much in his life, Jack was fully invested in the rigorous training. Not surprisingly, Ramsay was a little disappointed that his dedication wouldn't be put to use in defense of his country as he told the L.A. Times back in 1980:

"We were disappointed because we had trained for it. The emotional climate of the country was different then. You wanted to defend. It seems strange now, but I wanted the action."

Fresh out of the service, Ramsay earned his first degree in education at St. Joseph's, leading the men's basketball team with "hustle and intelligence" to make up for a lack of talent. After school, he briefly considered a tryout in the fledgling NBA but his chances weren't good and the money wasn't all that great, either. Instead, he took a chance at a career path that he would excel at for almost 40 years.

He started off at St. James High School in Chester, Pennsylvania; a post he would hold for three seasons. But he and his wife, Jean, had one child already and another was on the way, so Ramsay juggled the coaching gig while taking doctoral classes at Pennsylvania, and while playing semi-pro basketball in two different teams.

He had his hands full and loved every minute of it. But he also needed the money. One great story was shared in David Halberstam's classic The Breaks of the Game, where Ramsay recalled playing with a team called the Sunbury Mercuries. Players on that team got a piece of the gate and had to collect their earnings immediately after the game. But, as Halberstam explained, "it was very tough league," and physicality was born out of desperation.

"During one game Ramsay dived for a loose ball, cracked his head open and had to be taken to the dressing room. About an hour later he came to. ‘What happened?' he asked his teammate (Jack) McCloskey. ‘You got knocked out and the game's over,' McCloskey answered. There was a brief pause, the cobwebs still clearing, then Ramsay asked: ‘You got my money?'"

He built a reputation as a coach of being tough but caring and soon he was invited to take over the coaching duties at his alma mater, St. Joe's. He worked there for 10 years, growing into himself as a man and a coach, and the school was the perfect extension of the values that defined Ramsay. Another story recalled by Halberstam really highlighted the bond he developed with his players, described as "nice, blue-collar Catholic kids of the fifties":

"One of his teams had been invited to the National Invitation Tournament in New York. Before the first game he called the team together for a meeting. Very quietly he told them how hurt he was by the fact that, even though they were playing and winning, some members of the team were smoking cigarettes. It was a big thing at the time. There were no accusation, no punishments. But it was clear, they had let him down. The two smokers had stayed behind and apologized; the nonsmokers, who had let Ramsay down by not pressuring the delinquents themselves, brooded over their failure. It was that kind of sheltered time and place."

It was classic Ramsay. The players wanted to excel for him and he earned that devotion by being the consummate teacher, making practices rigorous and yet fun; even scrimmaging with his own players where they witnessed his competitiveness in full display.

It was a good life but Jack, always looking for that next challenge, wanted something more. In 1966 he got his chance, when the Philadelphia 76ers asked Ramsay to build them a better team as their general manager.

In less than two years, he was back on the sidelines again as their head coach.

The grainy video begins with perfectly funky 70's-style music, a shot of a player hustling back on defense in permed hair and too-short shorts. Soon enough it cuts to Ramsay, wearing a polyester suit, passionately pleading with his team. The name of the video is "Team Defense," Jack's calling card through two decades of coaching in the NBA.

Life in Philadelphia was not "entirely satisfactory," according to Halberstam. Ramsay struggled to relate to players that seemed to play more for money or glory rather than excellence. The Sixers struggled through his four-year tenure, going 30-52 in his last season.

The players had begun to doubt Ramsay, thinking he had "lost his touch." He had a tendency to take players in-and-out of the lineup when they weren't fully-engaged; he seemed to be judging their greater talent levels by his unparalleled dedication. Why weren't they doing more? he wondered. Even through the losing, however, his reputation in the league was still strong and he moved on from Philly to take over an expansion team in Buffalo.

The Braves were not built like Ramsay-type teams. They were big, bulky and lacked speed. But in Buffalo he had a Hall-of-Fame talent, Bob McAdoo, that needed coaching to bring out his incredible skills, the way a sculptor frees a statue from a block of clay.

McAdoo was a great scorer before Ramsay joined the Braves; it was, however, the only thing he seemed willing to do well. But "Big Mac" would have his best years under Dr. Jack, learning when to play defense (never something he did frequently), when to pass and when to put his elite shooting on display.

By 1976 the franchise was in disarray, and the Braves owner was always threatening to move the team (eventually it did in 1978, becoming the San Diego - now Los Angeles - Clippers). The Portland Trail Blazers were looking for a new coach and had an exciting young player, Bill Walton, that Ramsay could build a team around.

In his first season, Ramsay reshaped Walton and a cast of hard-working, unselfish players into the best team in the NBA, becoming championship winners in 1977. It seemed like a team built for a strong run until Walton's injuries and subsequent poor attitude forced the team to make a trade (ironically to Ramsay's old team, now in San Diego). 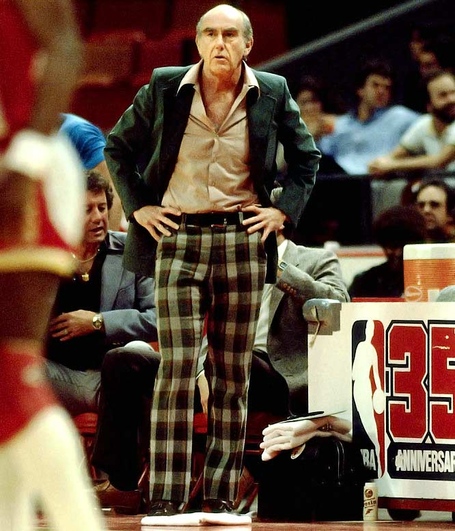 Halberstam's book is a marvel, framing Ramsay and the Blazers transition from title-winners to a team on the brink of collapse. The players' struggles to define themselves - within the context of the team and as professionals looking for a bigger paycheck - are counterbalanced with Ramsay's tireless work ethic. While the book follows the Dr. Jack and the team until the start of the 1979 season, Ramsay remained with the team until 1986 and then coached the Indiana Pacers for one full season before retiring from coaching in 1988.

He recorded 864 wins as a head coach. 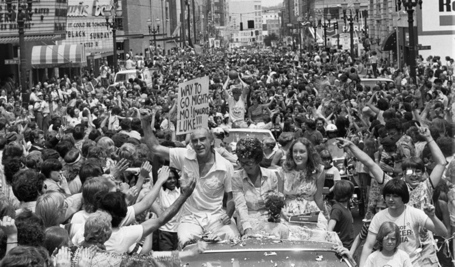 By the time I was introduced to him as part of the Heat's broadcasting booth, he seemed too old to have ever been a coach; maybe staying crouched on one knee along the sidelines had kept him young.

He still ran regularly (no longer Ironman competitions but still jogging in his sixties to keep in shape) and there was no denying his contagious enthusiasm.

During pre-game previews alongside his broadcasting partner, Reid, Dr. Jack would always share a bit of wisdom about the opposing team's best players. "I had a chance to speak with him before the game," he would begin, perfectly setting the scene. One pictured tall, flashy athletes of the 90's bending down and listening to the grandfatherly Ramsay, explaining their concerns about tonight's game even as they listened to some proven advice on how to apply better techniques to a team's defensive schemes.

But during the game, he was all restrained fire, getting caught up in the emotions of the game just as he had for the better part of the last century. He cheered for those Heat players so enthusiastically - yells of "Lenard! Lenard! Lenard!" and "This way...that way...the HARDAWAY!" - that you burned right along with him.

It was no surprise that so many of his players across the years eventually went into coaching. He taught you the nuances of the game while stile making it a joyous experience. Good Catholic kids. Red-headed counterculture heroes. Inner-city enforcers. Even young kids from South Florida who didn't know a thing about basketball. All of them sat in awe of Ramsay's wisdom.

So, thank you, Dr. Jack. For your stories, for your fire and for giving so many the gift of basketball. Wherever you may be, I'd like to think you're surrounded by family and friends, finding ways to teach them about love, teamwork and dedicating yourself completely to whatever you do.