Triumph: Why Alonzo Mourning chose to retire in 2009

With reports indicating that Alonzo Mourning has made the Basketball Hall Of Fame, I wanted to tell a personal story that should shed some light on Mourning, the player and the person.

Share All sharing options for: Triumph: Why Alonzo Mourning chose to retire in 2009

On December 19th, 2007, Alonzo Mourning refused to be carted off the court. Contesting a shot as he had done for his entire 15 year career, the then 37-year old's patellar tendon blew out. Banging the hardwood in absolute agony, Mourning, still prideful as ever, was merely helped off. With Dwyane Wade and Dorell Wright assisting him, Mourning walked off the Hawks court and eventually into the sunset. He would miss the rest of that miserable, godforsaken season, as Miami floundered to an appalling, humiliating 15-67 record, two short years after Mourning secured his first and only NBA Championship. 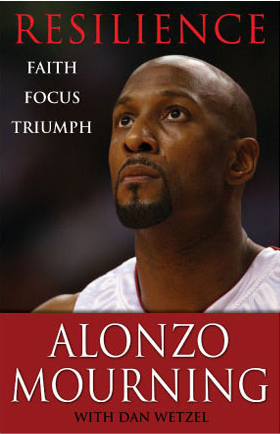 (You can purchase Alonzo's autobiography here.)

On September 30th, 2008, Alonzo Mourning released his autobiography, Resilience: Faith, Focus, Triumph, detailing his upbringing, recruitment, Georgetown, the NBA, and the trials and tribulations he endured rehabbing from having a kidney transplant. I won't go into details about the book, but I highly recommend every Miami Heat fan as well as anyone dealing with or knowing someone dealing with transplantation to check out the book. Being that 'Zo was my favorite player growing up, I was immediately hooked and took the book with me wherever I went. One day, a teacher noticed I was reading the book during class and asked me if I was aware Alonzo was doing a book signing in the area. I had no earthly idea, but I was told on December 17th, 2008 that Mr. Mourning himself would make an appearance at Barnes & Noble and would sign a copy of the book. I was ebullient.

Two of my close friends and I got there well before the scheduled signing. One of my friends was a Heat fan and the other was, believe it or not, a Knicks fan. At the time, only I possessed a copy of the book and we were told by security that the book was to serve as our ticket to meet Alonzo Mourning. Alonzo arrived approximately 30 minutes later than he was scheduled and apologized profusely for his tardiness. I didn't mind at all, seeing him towering over everyone, I was in awe. This giant man who I watched on TV impose his will on the basketball court was 50 yards away from me.

How Zo got to the HoF

He built the Heat into a perennial contender. He was ferocious, aggressive, and relentless. He lost it all, left, and came back to become a champion. Now he's in the Hall of Fame.

How Zo got to the HoF

Unfortunately, the now-formed line moved slower than a Chris Quinn-Joel Anthony pick & roll, but eventually my friends and I made it to the front. I was literally trembling. Security tried to halt my friend since he did not have a book, but Alonzo overruled them and had us both meet and speak with him briefly. Shaking his massive, but buttery smooth hand (my friend would later remark "it's like he washes with a better kind of water!") I stammered and stuttered my way towards explaining how I grew up watching him and how much I loved him. Alonzo graciously signed my black Mourning jersey and the copy of my book, even putting my name and "Go Heat!" in the signature. Right after, he again overruled security and spoke to my other friend, the enemy Knicks fan even though he had no reason to. He was as jovial with him as he was with every Heat fan, young and old that visited him.

Before we went to take a picture, we asked him how his injury was, how he was feeling, and if the rumors about him rehabbing to come back and help the 2008-2009 Heat were true. At that time, he sounded as if he was truly going to give it yet another go. He considered retirement after the NBA title, but hey, Alonzo loves to defend and a title was no exception. After getting humiliated by the Bulls, Zo, again, would "not go out like that." How shocked we were that a little over a month later, Alonzo announced he was walking away from the game. 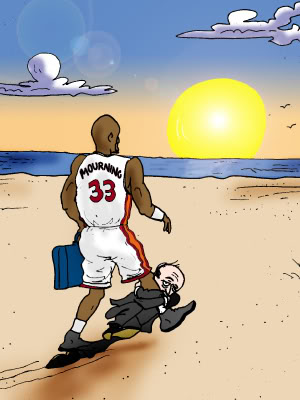 I was disappointed at first, because I truly thought Mourning could've helped that team (remember when you cared and overanalyzed a completely middling Miami playoff team?), but I never for a second believed he lied to me. Something he said in his retirement announcement stuck out, that myself, fans, and teammates kept asking him how his body was doing and how he was feeling. At age 37? That's old in NBA years, but Alonzo Mourning had survived focal segmental glomerulosclerosis and made it back to the NBA. He had a lot of life to live! His son, Alonzo Mourning III (Trey) is currently a college prospect himself and he wanted to be there for his family without further crippling his body. The Miami Heat organization immediately made plans to retire their first franchise cornerstone's jersey (sorry Glen Rice!) and two short months later, it hung from the rafters of the AmericanAirlines Arena

Fast forward to March 16th, 2014 and my friend and I attend the Heat-Rockets game. Thanks to a very special member of the organization, we got to shoot free throws after the game. As we, and a few other fans, stood on the now-carpeted court, there goes Alonzo near the first row of seats. "WE LOVE YOU ZO!!!!" I blurted out, knowing there's no way he remembers me from over 5 years ago, but sure enough, he acknowledged us! Another fan, wearing a Mourning jersey, asks to take a picture with him and he immediately acquiesced. As the woman ran towards the seats and stepped on the hardwood, one of the staff members tried to halt her, but once they saw it was Alonzo who gave the order, they froze and apologized. "This is Zo's house baby!"

So what does my rambling, incoherent story have to do with anything? Well, meeting your heroes can often be a terrifying experience. What if they are rude, insincere, or Jay Cutler? It could emotionally break some people. Alonzo Mourning could not have been further from that. This community truly means the world to him and he is about as kind an athlete as I've ever had the pleasure to meet. When the announcement for the class of 2014 Basketball Hall of Fame is made official, I will be glued to the television to watch his acceptance speech.

What an honor it was to watch him give everything he had on the court. Thank you Alonzo Mourning for being even better in person than the rim-defending superhero I first envisioned you as.

Have any Alonzo Mourning stories to share? Feel free to leave one in the comments section.