If you're like me, you spent your Saturday afternoon before the parade of Game 7's listening to the TED Radio Hour on NPR. If you're not like me, this is what you missed. That Superman pose that Erik Spoelstra does (all the time) is changing who he is!

You see, at TEDGlobal 2012, Harvard professor and researcher Amy Cuddy gave a 20 minute speech titled, "Your body language shapes who you are." (Stay with me here.) We've long known that non-verbal communication, like body language, speaks volumes. A power stance tells the world you're powerful without you even having to say a word. However, Cuddy's research has shown that your body language also shapes "who you are."

Now if you think about it, Miami Heat Coach Erik Spoelstra has to be the undisputed king of the Superman Stance. Feet spread, chest out, hands on hips. He does it all the time. In fact, I saw him in Coconut Grove just last night standing at the intersection of Main and Grand waiting for the light to change and sure enough - Superman Stance. It's one of a handful of power stances that show the world you're powerful. Just like in the animal kingdom, when you make yourself big, you appear powerful. 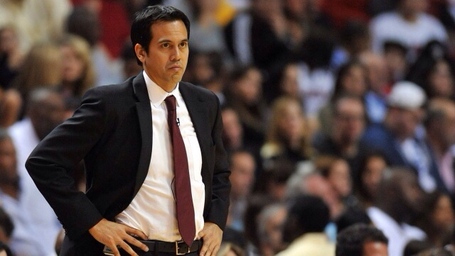 But this is how Cuddy's TED Talk took things a step further. She says, "We tend to forget the other audience who's influenced by our non-verbals and that's ourselves." When you're in a power stance, your body is actually telling you that you are powerful. People and animals who are powerful have relatively high testosterone (strength) and relatively low cortisol (stress.) Her research shows that standing in a power pose like Coach Spo's classic Superman Stance for even 2 minutes can change those hormones levels and physiologically turn you into a powerful person!

Just think, every time you see Coach Spo standing like Superman on the sidelines, that pose is actually raising his testosterone and lowering his cortisol. He's getting stronger and less stressed.  A quick google image search will pull up countless photos of Spo standing that way. Jason Kidd, not so much. Same for Frank Vogel. But Spoelstra, LeBron James, Dwyane Wade, all power posers.

"Standing in a posture of confidence, even when we don't feel confident - can affect testosterone and cortisol levels in the brain, and might even have an impact on our chances for success."

Try it for yourself sometime and feel confident when you see Coach Spo doing the Superman whether on the sidelines or anywhere else. He's becoming more powerful and he's increasing the Heat's chances for success.

One power pose at a time.