The truth about Heat fans and those boos

Chris Bosh's wife, Adrienne, shed some light on boo-gate via twitter and it brought us back to the truth about Heat fans.

Share All sharing options for: The truth about Heat fans and those boos

Miami Heat fans have taken a bashing for the hundreds of fans that left early and for the boos that ensued in the final few minutes of Game 4. Tonight, some lower level fans, including the ever-present Mrs. Adrienne Bosh, started tweeting out their truth:

@MrsAdrienneBosh @hothothoops I was there - the Boos came when the SA bench started celebrating...

Agree with @MrsAdrienneBosh. @hothothoops after the dunk they booed & looked like it was towards the Spurs bench.

Truth is, there’s a significant chance that Heat fans were not booing their own team, they were booing the Spurs’ success and subsequent celebration. Not a classy move, I know, but very very different than the picture that’s been painted by the national media.

Yet, there can be absolutely no excuse for leaving early when your team is in The Finals. It’s not like being at a bad movie, this is a team of elite athletes playing live in your face in a game that only 2 teams get to play each year. They are the best of the best and win, lose or get blown out, you stay until the final buzzer. You don't have to tell that to the upper level fans, though. Those fans are far out of sight from ESPN’s game time cameras. It’s a tale of two levels, really. The upper level fans stay until the end.

Truth is, even "cheap" Finals tickets can be a huge sacrifice for upper level fans. One family had to decide between a summer trip to Washington DC for the 4th of July or going to see the Miami Heat play in the NBA Finals. It was clear they could not afford both and they hadn’t flown anywhere together in years. But the family understood the significance of this era and knew they had a very small but distinct window of opportunity to witness greatness, so they chose to see the Heat play the Spurs. They sat in the 400 level surrounded by fans who had made similar sacrifices and like their neighbors in Standing Room Only, they stayed until the final buzzer.

Truth is, you don’t see the thousands of Heat fans who are completely priced out of the game or the ones who live too far or have to work or who have no job or can barely make ends meet. The "Heat fan" conversation paints all "Heat fans" with a very broad brush, including them in the comparatively small handful that left early and for whatever reason, boo’ed. 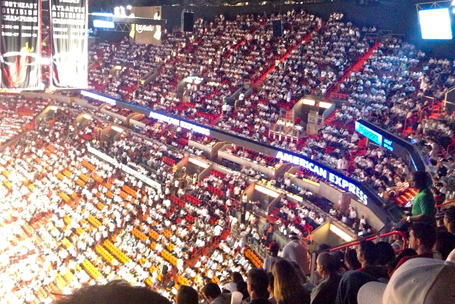 Truth is, there was a distinct line of demarcation separating the "leavers" from the "stayers" and that was the upper level railing. ESPN doesn’t see the contrast or the tale of two levels.

Truth is, the hundreds of Heat fans who poured out of the arena early straight up embarrassed the thousands of Heat fans who only wish they could have had those seats, regardless of the outcome or the final score. But as I go to Publix to buy sparklers for my kids on the 4th of July, swatting mosquitos and watching "A Capital Fourth" on PBS, I’m at peace knowing we witnessed history for better or worse. We sacrificed a summer trip and we sat in traffic for a team and an era we are thankful for.

And like so many others, we have no regrets.