Dwyane Wade underwent a season long maintenance plan to remain healthy for the postseason, for the most part it worked beautifully, but on the biggest stage Wade failed. Wade has the talent and work ethic to become great once again, but how will he go about it?

Dwyane Wade has been the subject of much criticism since last Thursday as he followed up an atrocious game 4 performance with an extremely average outing in game 5. With LeBron playing out of his mind, Wade appeared to be an average player, and dare I say it resemble a (has-been). What was the most disconcerting, however was how Wade responded in interviews to questions regarding his health, when asked about his knee following game 4 Wade said:

"I'm fine," Wade said. "Way better than I've been in a long time. Last year I had one leg and did all right. So I'm totally fine. I didn't play well in Game 4. Has nothing to do with my health at all."

This is terrifying, but also hardly truthful in my opinion. As someone who’s dealt with knee issues in basketball, it’s evident to me that in the NBA Finals, Dwyane Wade was indeed hurt and it ruined his game. If you go back and compare any Finals game to the Indiana series just a week earlier you’ll notice a difference in Wade’s lift. Dwyane Wade has depended on his athleticism so long, that when he can’t summon the power from his legs he becomes overwhelmed mentally.

Wade was extremely effective against Indiana, because his knees were healthy. Upon analysis of the Game 3 film it’s obvious that Wade’s first step was present. Wade was able to dart through defenders and deliver his signature euro-step at full force by shooting the ball high off the glass. He was extremely active on the defensive end, as made evident by his block on Scola, and his multiple steals. Wade also made a statement from the mid-range, hitting nearly every shot near the elbow while at the same time working in perfect sync with LeBron. Needless to say Wade was confident and looked fantastic coming into the NBA Finals.

Coming into the Finals however, something went horribly wrong and Wade’s first step and scoring ability seemed to fade. His defensive tenacity vanished, and he wasn’t able to run the floor with speed at all. Wade seemed lethargic, hardly a force to be reckoned with as he was outplayed by both Danny Green as well as Patty Mills. The one game where he was able to score (game 3) was overshadowed by the Spurs’ record first half leaving the only Wade highlight from the 2014 Finals on YouTube his dagger layup in game 2.

I expected Wade to come back and tear up the series similar to last year’s game 4. After all momentum is a cruel mistress and no doubt was the largest factor in Miami winning the 2013 NBA title. Prior to this series I figured Wade to be Miami’s X-Factor due to his good health, but things did not go that way. At all. Nevertheless, I feel that much of the animosity directed at Wade is unjustified. Wade is an old 32 year old, and as a result his odometer has a surplus of miles and calls for a change in style of play which Grantland’s Kirk Goldsberry proved is indeed happening 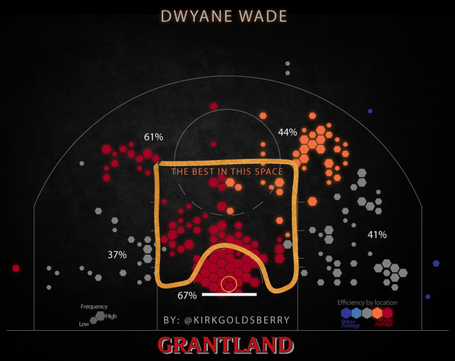 It’s disappointing to see an extremely effective season be completely overshadowed by one series failure, but of course that is the nature of the game. Perhaps it’s time to recognize that Wade is not the player he used to be, but then again neither is Kobe Bryant, or LeBron James. Wade is making adjustments to his game, and that causes uncomfortability due to the unfamiliarity with certain play styles Still, Wade manages to remain elite and by continuously adding variety to his game will make amends for his poor performance in the 2014 NBA Finals.

So what’s next for Dwyane Wade?

How does Wade bounce back from this disappointment of a finals? That is the question that is on everybody’s minds as we enter the offseason, and it’s hard to tell. Dwyane Wade has many options at this point in his career to improve himself healthwise, and at the end of the day it’s hard not to make that criticized comparison to Kobe Bryant, but in a different way. Bryant, was able to prolong his career by escaping the clutches of father time, utilizing a platelet-rich plasma knee therapy known as Regenokine. While Wade has denounced the use of using this treatment in the past saying:

"I [told the fans], 'Great, but if I get kneed in my knee again, is it going to stop that? Is it bone-bruise-proof?'" Wade elaborated on Friday. "It's not a structural thing, so it's really not what [blood-spinning] does. I think people have a little bit of a misconception about exactly what that treatment does and what my knee went through last season. I went through bone bruises."

This year, we don't know what Wade suffered knee-wise and honestly there is really no harm at this point in Wade's career to try something new. At the very least it will improve his game slightly. The treatment has worked great for elite players like Kobe Bryant, and Peyton Manning, why not Dwyane Wade? After seeing Wade shell shocked in game 4, unable to generate enough lift to sink a floater this definitely seems like a viable option moving forward.

If Wade really wasn’t hurt, and his knees are fine he should be quite disappointed in his play. Be as that may, the silver lining is that Wade will be able to put in an unprecedented amount of off-season work and return to form. The best option for Wade right now would be to go to Chicago and spend the off-season training with Tim Grover (or fly Tim to Miami). Grover is widely recognized as Michael Jordan’s strength and conditioning coach, but has worked with Wade for a large chunk of his career and as a result Wade responds beautifully to each meeting. In March it was said Wade visited Grover before the game against Chicago and the results speak for themselves.

Another option would be to work with a shooting coach, or maybe even Ray Allen (dependent on his own offseason plans) to transition his game even further. As a professional athlete Dwyane Wade has so many tools at his disposal to enter next season primed and ready to go.

It’s tough to see such an athletic player enter his decline and fail when needed the most, but there is no doubt in my mind Wade will be able to transform his game to fit his physical capabilities and respond accordingly.