Here's a look at how Miami lost Game 1 in the final three minutes of play. With James struggling with cramps and dehydration and the rest of the Heat (and Spurs) battling fatigue, Miami needed a miracle. Instead, they watched as San Antonio scored the final 11 points of the game.

Share All sharing options for: Breaking down how the Heat lost Game 1 vs Spurs in the final minutes

There was a moment where the Heat seemed like they may have a chance, even as LeBron James watched the game move on without him. With the score now at 99-95, Mario Chalmers has finally done something positive and hit a 3-pointer over Tim Duncan's endlessly-long arms. Chalmers, lost in the clouds for most of the game and confined to the black hole of the bench, seems to have given Miami hope.

With LeBron watching from the sideline, the lineup on the floor consists of Chalmers, Dwyane Wade, Ray Allen, Rashard Lewis and Chris Bosh. In other words, the starting lineup substituting one Hall-of-Famer (James) for another (Allen).

The Spurs' lineup counters with Duncan, Tony Parker, Manu Ginobili, Danny Green and Boris Diaw. Diaw and Ginobili are in for starters Kawhi Leonard and Tiago Splitter, as Leonard has been largely ineffective and foul-prone and Diaw provides scoring versatility that the 7-footer Splitter cannot match.

Following the Chalmers shot, Parker brings the ball quickly upcourt and then passes it to a waiting Ginobili out on the perimeter wing. Parker immediately curls along the baseline to position himself on the opposite side of the floor. 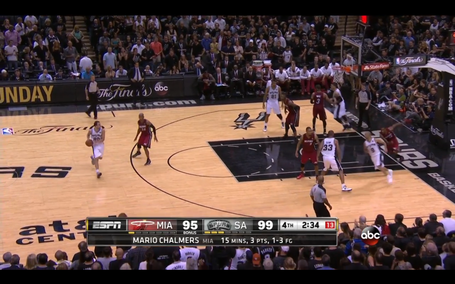 The play seems intended for Parker but Chalmers (having been preserved on the bench and not as fatigued) does a good job of staying with the speedy Spurs guard. Ginobili hits Parker who immediately passes it back. Green (who has just scored 8 of San Antonio's last 10 points) moves toward the wing as Duncan starts sliding toward Ginobili; Miami is temporarily caught unaware as Bosh had been hedging toward the left side of the court (assuming Parker would be running the play). Wade stays with Duncan for a moment, freeing up Green, until Bosh recovers.

By this time, Green has the ball but Wade quickly closes on him. Green bobbles the ball a little with Wade all over him and finds Duncan, now positioned on the elbow. Green quickly cuts to the basket as the shot clock winds down and Duncan makes the pass, which Green again bobbles, this time out of bounds. Spurs turnover with 2:26 left.

On the ensuing play, Chalmers takes the ball downcourt, tries to run a screen with Bosh but quickly pulls back to the perimeter. He passes it to Lewis, wide open from the wing. 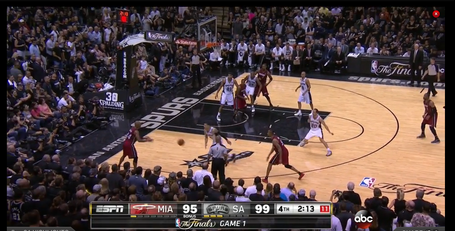 But Green slides Lewis just enough to force a pass to Allen, a much better shooter in the corner. Green quickly recovers back to Allen, who fakes the shot, gets Green to jump past him, and then takes a wide-open 3-pointer. The shot caroms off and San Antonio rebounds.

Parker brings the ball up and immediately initiates a screen with Duncan, guarded by Bosh. Wade had been shadowing Parker but is now switched onto Duncan, a clear mismatch. As Duncan uses his bulk to keep Wade immobile, Parker immediately bursts past the slower Bosh for an uncontested layup. But he misses! Regardless, Wade's struggle results in a foul as he had been grabbing Duncan's shorts to keep him from rebounding Parker's miss.

The Heat were still under the limit so no free throws were taken. During the stoppage in play, Coach Gregg Popovich inserts Leonard for the struggling Green. Parker and Duncan run the same screen but the Spurs have an imbalanced shift that catches Miami unaware again, clearly expecting either Parker or Duncan to take the shot. Instead, an ineffective hybrid of Allen/Wade/Lewis is left "guarding" Ginobili, Leonard and Diaw. 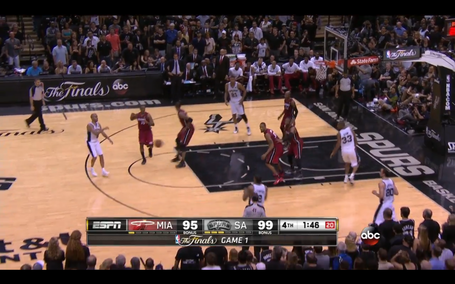 Leonard finds himself free on the perimeter and, despite his shooting woes, takes the open shot and connects. Even if Lewis, the closest Heat player, had rotated quickly enough onto Leonard, Ginobili was wide open in the corner to take the shot. Clearly, the combination of fatigue and James' departure has taken some of the punch out of Miami. The Spurs are up 102-95, with 1:45 left.

Chalmers, probably the only Heat player with any energy left, starts to run a play, shakes off Parker and drives to the rim against Diaw. While normally this would seem like a mismatch that Chalmers could take advantage of, instead he retreats back to the perimeter and, still guarded by Diaw, makes a horrible pass to Allen. The ball crosses the midcourt and Miami turns the ball over. By this point, you get the feeling that Miami doesn't have anything left in the tank if their most rested player (Chalmers) is playing that sloppy. Cameras catch a disgusted look on Wade's face that sums up the team's frustration perfectly.

San Antonio, meanwhile, has caught their fourth or fifth wind by this point. The next play is perfectly Spurs-ian, as Parker hits Diaw with a pass, who connects with Duncan, who then runs a staggered screen with Ginobili. Duncan slides into the paint and Miami's defense is lost by the Spurs' execution and timing. Parker is now in the corner awaiting the Duncan pass. 3-pointer. Bang.

With a 10-point lead and the game out of reach, Miami throws in the towel. Cameras follow James limping to the locker room, perfectly symbolic of the Heat's collapse. Wade missed a 3-pointer on the next possession and the Spurs rattled off five more meaningless points but the game was well over by the time the clock expired.

There's no doubt James' presence would have changed the outcome of the game but the Heat squandered an opportunity to close out the game and simply fell apart as the fourth quarter wound down.