3 Adjustments Miami must make before Game 2

The Heat lost by 15 in Game 1, yet nearly could have walked away with a win. Still, there's plenty of adjustments the team can make to help better their chances for Game 2.

Share All sharing options for: 3 Adjustments Miami must make before Game 2

The Miami Heat had control of Game 1 looking to take the opening game. With a 7 point lead in the fourth, the Heat let it slip away and the Spurs took it at the same time. They shot 14-16 FGs, made 6-6 3PTA, while LeBron watched much of it from the bench. A lot went right for San Antonio and a lot went wrong for Miami. We covered how things played out over the end of the game already.

The Spurs, in large part to their fourth quarter, shot 58% for the game, and out rebounded the Heat by 10. That's going to be hard to overcome on the road, but regardless, the Heat were within striking distance until the end. Here's three things I noticed from the game that the Heat should really focus on before Game 2 in their adjustments.

1.  The ball needs to move more.
The Heat assisted 16 times on 37 field goals made. The Heat, at minimum, would like to see that number be at 50% of their FGs. On the other side, the Spurs assisted on 30 of 40 made FGs. That's the Spurs' bread and butter, and a standard Miami shouldn't be expected to reach. But regardless, the Heat need to do a better job creating for each other.

Much of this could be helped by Mario Chalmers actually playing in the game. Chalmers was held to 17 minutes, had 5 fouls and 5 turnovers. Regardless of what you think or feel about Chalmers, he is an important part of the Heat's offense. Not only does he stretch the floor more than Norris Cole does, but he is capable of initiating the offense for others. Countless times we have seen Chalmers just play PnR with Chris Bosh and create baskets for him. Chalmers will help with the ball movement, albeit he was terrible at it in Game 1, forcing action that wasn't there.

But the assists mark will also be a reflection of the attitude and style of both LeBron James and Dwyane Wade. Many times, we saw the Heat just isolate way to much and late in the shot clock rely on them to bail out. That's what the Spurs want, and that cannot be what the Heat deem as acceptable. It works better at home than the road at times, but the Heat need to keep the ball moving, trust the process, and make the extra pass.

2.  Pressure Tim Duncan to do more.
Duncan was extremely efficient in Game 1. He shot 9-10 FGs, had 21 points and 10 rebounds as well as 3 assists. Most of Duncan's baskets were assisted and he was just the finisher. But what was most concerning is that Duncan was always getting the ball right where he needed to get it, often in the middle of the paint. If the Heat want to slow the Spurs offense down, they need to pressure Tim Duncan more.

Now, a lot of this happens from the primary PnR from the top with either Manu Ginobili or Tony Parker, and Duncan then flashes to the middle, it's right there where the Heat get in trouble. Duncan knows the offense so well that he is the primary trigger from the middle. He knows exactly, and I mean exactly where everyone is on the floor. Even if he isn't the assist man, he is triggering the action that is causing rotations, run outs, switches, and ultimately the open man.

Miami has to find a way to pressure Duncan before he gets the ball, or prevent him from getting to the space or seeing the floor. Duncan is so smart and fundamental that is usually makes the right play. The Heat will help themselves if less of the decision making is Duncan's and more of it belongs to Tiago Splitter or Boris Diaw.

3.  Attack, Attack, Attack.
The Heat played right into the Spurs' hands when it mattered most. Despite having a 7 point fourth quarter lead, the Heat shot 7-18 in the fourth quarter, and were outscored 36-17 in the period. Miami settled and were forced into the shots that San Antonio wanted them to take. The Heat shot twice as many field goals outside the paint as they did inside. 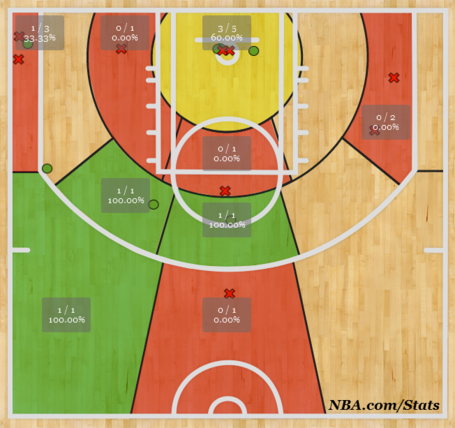 The Heat have to remember that attacking the Spurs is their best effort for a win. The Spurs don't have an elite shot blocker, and although they pack the paint, they have pushed up on LeBron in their strategy. Wade found his way into the lane plenty of times in the first half, and LeBron a few as well -- they both need to do a better job to keep attacking. They know this, it's just a matter of doing it.