Video: Dwyane Wade fined by the NBA for Game 2 flop against Manu Ginobili

The NBA hands down the punishment a day after Sunday's Game 2 victory.

Share All sharing options for: Video: Dwyane Wade fined by the NBA for Game 2 flop against Manu Ginobili

Miami Heat star Dwyane Wade has been fined $5,000 by the NBA for his first violation of the league's anti-flopping rules.

The foul was called on San Antonio Spurs guard Manu Ginobili with 4:09 left in the second quarter of Game 2, which ended in the Heat winning 98-96 on the road.

"He took a swipe and he hit me," Wade said Monday before the fine was announced, according to ESPN. "It was a late call by the ref, but he called it."

The NBA and many fans saw it differently, though. While it may seem like an obvious flop, and it may very well have been the case, the angles on the replays shown immediately after the foul was called only show Manu's hand passing in front of Wade's head. A better angle, similar to the one that Heat coach Erik Spoelstra had of the play, could show conclusively how much distance was between the two players.

After watching the replays of the play several times, what may also appear to be the case is that Manu's elbow could have made contact with Wade's elbow and/or Manu hits Wade in the hand. So a foul could have been called anyway and Wade could regardless have been fined for over-exaggerating the foul.

Or the ref simply blew it, figuratively and literally. 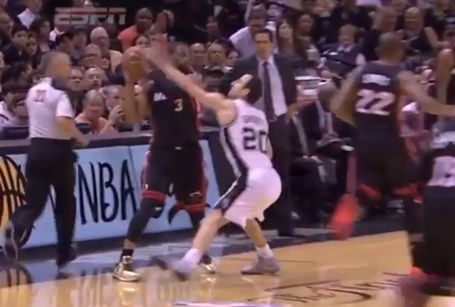 ESPN analyst Mark Jackson also raised a valid point by questioning why an NBA veteran already with two fouls in the second quarter would even attempt such a play that far away from the basket during such an important game.

The Heat eventually won the game by two points after allowing an inconsequential three-pointer as time expired.