"You will be missed."

Share All sharing options for: Thank you, LeBron James

I've spent numerous hours being emotional over sport. This time it's personal. I've always wanted the chance to be able to sit down and tell you how you are the reason for the dramatic changes in my life these past two years.

You've walked past me several times, once yelled out at me to avoid running me over and while I'm sure I'm no more than another fan amongst your legions of admirers, to me, you are one of the most significant people I have never met.

I only discovered you around 2005-06. Then you are nothing more than a background on my then boyfriend's MySpace page. He was a Celtics fan but loved you.

"He's the best player in the world" he told me.

I, on the other hand, didn't care for you at all and hated that our Saturday mornings (Australian time) were consumed by watching you instead of sleeps-ins and brunches.

Initially I thought you were full of it until I started to watch documentaries on you and read more about the one they called "The King". Day by day you were growing on me and despite me being a then-casual Miami Heat fan, your journey was one I followed closely.

In 2010, I sat at my desk at the magazine publishing house I worked for and watched the news of your decision while pretending to edit copy. You chose South Beach and then and there my partner and I booked a trip to see you play in March 2011.

Weeks past and in that time I left my boyfriend, he instead went on the trip alone and I sat back regretting I never went. All I wanted was to see you play live. Sport is my soul existence, I live and breath it and just like Roger Federer, Usain Bolt and Rafael Nadal, you were another athlete I simply had to see before I miss the boat.

More time passed until last year in Feburay 2013 while watching the Miami Heat going on their winning streak, I finally booked my big trip to Miami to see you, and the Heat, play. I'd never been here before and I was coming here alone. All I wanted was to cross seeing you dunk off my bucket list.

I landed here in Miami at 3am on a Friday, the Heat were playing Boston in one of the last regular season games. I woke up around noon, walked out of my hotel and took in South Beach like any tourist would before getting ready for the game.
I walked into the arena like a kid. There you were. This was really happening. I needed to share it all with friends and Twitter so I turned on my wifi and racked up an $1100 phone bill. I hardly remember the game. I was drunk on elation. Who cares. I was here getting to experience one of the greatest in our era play.

Then be it a mix of timing and fate, I never returned home. I stayed on and watched you win your second NBA Championship live. Game 6, I too stood 11 rows back and watched Ray chuck up that 3. Watched you receive your 4th MVP award. All of it. And it wasn't just one Finals run, you lead me to two. Two ridiculous NBA Finals one good, one not so much, both engraved into my memory for years to come. In turn, I experienced the most incredible three months of my life because you chose to come and play here.

I often wonder would I have ever saved and flown over to the US if you went to another team or stayed in Cleveland? Would I have stuck to the predictable L.A and NYC sporting destinations? I'll never know, I just sit and think how crazy all of this has been.

I witnessed some of the greatest basketball ever because of you. I met people I never would have, because of you. No, this is not a Kelly Clarkson song. These past 18 months have quite simply all come down to you. I continue on in Miami as a Heat fan regardless and I do hope you make the town of Ohio feel the way I did these past few years.

I can't wait to see you return to Miami with the Cavs. I'm only sorry I never knew this was coming. But it's not about me. It's about you.

Thank you. You will be missed. 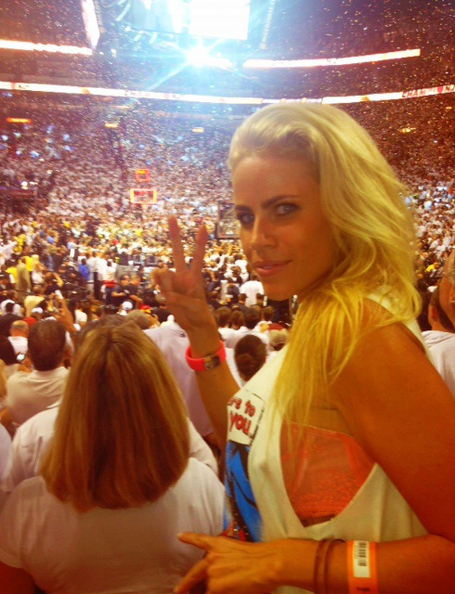