Wade and the Heat came into the 2012-2013 season primed to make history. With the basketball world against them once again, they proved once again that impossible is nothing.

The summer of 2012 was a unyielding offseason for Dwyane Wade.

Following his second championship ring after defeating the Oklahoma CIty Thunder in the 2012 Finals, Wade felt his knee wasn't right. Wade elected to undergo a knee procedure which thus caused him to miss the 2012 Summer Olympics and miss out on winning another gold medal for the USA. Nevertheless, the knee surgery didn't seem to faze Wade too much once the season began.

Wade averaged a respectable 21.2 points, five rebounds, and five assists per game in 69 games played. Once again his play warranted numerous accolades including his ninth consecutive All-Star selection as well as a place on the All-NBA third team. Towards the latter half of the season, Wade was playing tenaciously and his elite play coupled with the athleticism of LeBron James led to Miami making history once again in the form of the infamous 27-game win streak.

Despite being criticized in the year while he found his footing, Wade became an efficient scoring machine during the streak averaging 22.8 points of 53.6% shooting. During this time, Wade seemed to return to the form Heat players recognized, an athletic ball menace who darted through defense with ease and delivered earth-shattering slams. He even found his shooting touch again. It's important to note that during the streak, his chemistry with LeBron entered an all-time high as made evident by numerous alley oops in transition. While, it was of course a team effort, Wade's play was essential in Miami winning those games.

Of course the 27-game win streak wasn't the only highlight of the season, Miami also hopped on the viral video sensation 'The Harlem Shake" and delivered one of the best performances ever.

Following the win streak, it was revealed that Wade was suffering from knee pain leading into the postseason. While he was hopeful it wouldn't effect his play, Wade delivered his worst postseason statistics ever, averaging 15.9 points 4.6 rebounds and 4.8 assists. Wade unfortunately struggled at various times against the Indiana Pacers, and other teams alike. He didn't really come into his own until the NBA Finals where of course history was made. Nevertheless, he sure delivered his fair share of highlights during the postseason as can be seen in the following video.

The Heat and the Spurs put on what can be considered one of the best Finals ever, pestering each other in a relentless war that went a full seven games.

Wade, put his pain on hold during the time even delivering flashes of his alter ego "The Flash" at certain points. When Game 4 came along, a new Wade found his way to the hardwood. He worked in perfect sync with James, and found the footing he was lacking in the earlier part of the postseason. Wade was able to deliver an arsenal of moves that no one could stop, his fadeaway jumper was deadly as ever and his touch on floaters was unstoppable.

Wade was of course able to continue this trend in the final three games, putting up elite numbers and finally putting the Spurs to rest.

While not the most spectacular Dwyane Wade season, his effectiveness as a basketball player was certainly evident and resulted in his third NBA championship which he deemed a championship for himself, the first being for Alonzo Mourning, and the second for James. The lasting image of the season being Wade giving his knee champagne, a beautiful image of an athlete basking in the glory of a championship his team worked so hard to earn. 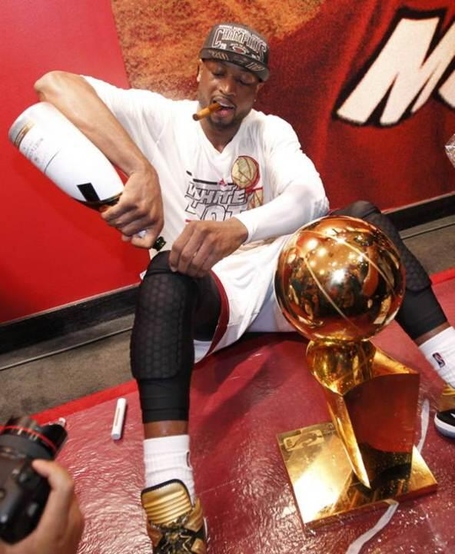