The 2014 Miami Heat Offseason was filled with suspense, tears, recovery and optimism. Let's review what the Heat lost and gained in the process.

Share All sharing options for: Reviewing the 2014 Miami Heat Offseason

This offseason has surely been filled with emotion for Miami Heat fans. Now, the Heat have only one roster spot open and are nearing the beginning of training camp. It's always an exciting time as the new NBA year is slowly approaching, so let's take a moment and review how the offseason went here in South Florida.

After the disappointing loss in five games to the San Antonio Spurs in the NBA Finals, Riley the Heat immediately had to refocus on turning this team around. It became clear that the product that they had on the court was not good enough to beat the team oriented Spurs. About a week after the loss, they started that process.

NBA Draft
We had very little idea what the Heat were actually going to do on draft night. Chet Kammerer, the Heat's lead scout, said they had about 20 players that they really liked and were comfortable taking. The problem was that they were picking #26. It became pretty clear that night that who they wanted was going to be who they got. The Heat traded up a few spots and sent out a future second round pick and their #26 pick for Shabazz Napier who was selected by the Charlotte Hornets. 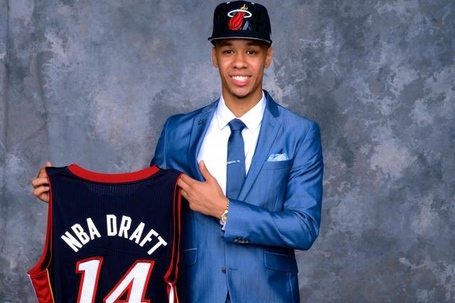 Napier was the NCAA Final Four MVP and a two-time champion. It seemed as though this pick was a coveted one because earlier LeBron James glamoured Shabazz as the best point guard in the draft, although several were taken before him. It looked like Napier was going to be the first piece to reworking the roster, and maybe a step forward to pleasing the King.

Summer League
The NBA offers two different Summer Leagues and the Heat are one of few teams who participate in both. It was a chance to see Napier in action, and though he struggled a lot, he showed plenty of promise. They also got to see the improvement of James Ennis, who has now been awarded a contract, and also Justin Hamilton, their young project big man. The Heat brought in several other intriguing young players to evaluate their talent, and a few will be in training camp.

Free Agency
The start of free agency was about as quiet as you could imagine in Miami. No words from the camps of Dwyane Wade, LeBron James or Chris Bosh. It seemed as though they were all just waiting to see what Pat Riley was going to do to fix the roster. Reports came out about the meeting over lunch between the three and we saw Wade and LeBron together at times.

Near the end of the start of free agency Riley had two commitments: Danny Granger and Josh McRoberts. It was hardly the home run that would entice anyone to stay, but with the salary cap holds, it became clear that Riley didn't have as much room as people thought. Carmelo wasn't coming, Kyle Lowry and Marcin Gortat weren't coming, and the truth starting to set it. It seemed as all of free agency was in a standstill until LeBron and Carmelo decided what they were doing.

LeBron
This all led up to the days that we all feared but doubted would happen. Around noon on Friday July 11, Sports Illustrated broke the story in a letter from LeBron James that he would be returning to the Cleveland Cavaliers. It was obvious this premeditated and that James had made this decision earlier. He had met with Pat Riley a few days earlier in Las Vegas and gave no indication that he was leaving, although it looked like it was clear at this point.

James made it a very personal touch as he wanted to bring a championship to Cleveland, but, nonetheless, it was a disappointing end to a team that went to four straight NBA Finals and still wouldn't have had much of a match in the Eastern Conference. Pat Riley and Micky Arison responded in class and thanked James for his time in Miami, but admitted that they were surprised by his decision.

LeBron James explains his decision to return to the @Cavs in an exclusive SI interview. http://t.co/3dAzWO3ZXH pic.twitter.com/n2j4qCAcOa

Post-LeBron Recovery
After LeBron, it seemed as though the wheels would fall off. Chris Bosh had a pending agreement with the Houston Rockets who had traded off Jeremy Lin to clear room to sign Bosh to max 4-year deal. And we all thought that if James and Bosh left that Wade might look elsewhere also.

Then, things changed quickly. Despite being in Africa, Bosh decided that same day that LeBron left to stay in Miami for a 5-year max deal worth $118 million. Then an agreement from Wade. Soon they had agreed to bring back Mario Chalmers and Chris Andersen as well as Udonis Haslem. Free agent Luol Deng signed after the Heat tried and tried to get him here. All of a sudden, the Heat went from the verge of irrelevance to a team many think could still grab home court in the East.

It was such a fast recovery. Instead of whining about losing LeBron, Riley and company got to work and brought back much of the roster and a few other pieces to turn it into a contender. It was impressive considering the circumstances.

Final Pieces
After that, it became clear the Heat would take their time in adding additional pieces to see how the market played out. They signed James Ennis who they are excited about. They brought in Reggie Williams and Shawne Williams as veteran help. They grabbed Tyler Johnson and Andre Dawkins from SL to the training camp roster as well as swingman Shannon Brown. They said goodbye to James Jones, Michael Beasley, Greg Oden and Rashard Lewis. And we will soon say goodbye to Ray Allen as well.

The roster took an overhaul, as expected, but in light of losing the biggest star in the game, the Heat kept many core pieces and have an intriguing roster.

Coaching Staff Changes
Lastly, the Heat decided to go in a different route on the bench. Ron Rothstein and Bob McAdoo stepped down from the bench for different roles and allowed David Fizdale to be the Assistant Head Coach. The move also allowed them to bring in Keith Smart, and move Juwan Howard onto the bench. They recently added Chris Quinn to player development also.

The change marks a new time for Heat basketball. It's going to give them a chance to play a different brand of basketball, and we should all be excited about that. Read all about the front office details HERE.

Conclusion
It's been an offseason of change.

But that change is going to bring about new excitement for the team and the season. Stay tuned to Hot Hot Hoops as we begin to preview the season that is just over a month away.