The high-flying guard has the tools to be a more sound backup at shooting guard. Will he be able to separate himself from the pack?

Miami further bolstered their backcourt depth by signing shooting guard Shannon Brown. With the free agency pool nearly dried up, Miami opted to acquire a bigger guard in Brown rather than look at a more hybrid player like Leandro Barbosa, who signed with Golden State.

Brown was a bit of an NBA vagabond his first few seasons, bouncing in and out of the NBA Developmental League after being drafted with the 25th pick in the 2006 NBA draft by Cleveland. Brown had short stints in Chicago and Charlotte before eventually finding a home in Los Angeles. For three seasons, Brown was a reserve to Kobe Bryant, averaging 20 minutes a game and averaging 7.9 points per game. During his time as a Laker, the league would soon learn of Brown's absurd leaping ability.

Brown remains one of basketball's greatest athletes and at 28 years old, is still very much in his prime as a leaper and finisher. Laker fans famously campaigned to "Let Shannon Dunk" in the 2010 dunk contest (he finished 3rd).

Upon joining Phoenix, Brown earned more minutes and more shots, averaging 10.7 points per game in two seasons with the Suns. He shot a career best 36.2% from beyond the arc in the 2011-2012 season before suffering a huge drop off the following year, shooting a ghastly 27% (related: Steve Nash was his teammate for only one of his Phoenix Suns seasons. Guess which one that was). 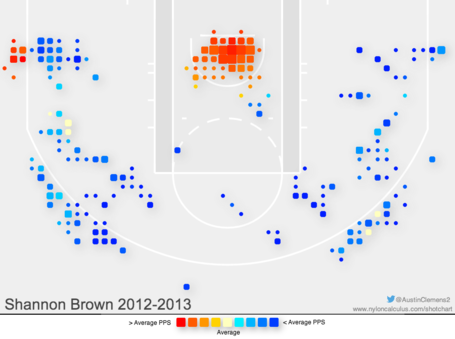 I chose to highlight the 2012-2013 season as it was Brown's last full season as a major rotation player, but it should be noted that that iteration of the Phoenix Suns was a really bad team (starring Michael Beasley!) and in Miami, Brown will have a lesser role with shots more in his comfort zone.

Brown PPS (points per shot) is not easy on the eyes, though his proficiency in the paint remains a plus. Brown isn't a player who will effectively create for himself or others (a paltry 2.3 assists per 36 minutes for his career). He'll shoot threes, but historically hasn't converted them at a high enough clip and is a streaky jump shooter in general.  He can get hot from the perimeter, but he remains better served as a slasher, cutter, and open court player, where his prodigious vert can be put to it's best use.

Brown has the tools to defend the perimeter well, but his effort in that department waned in Phoenix. Going from a title contending Lakers squad to a rebuilding Suns team would have that effect on most rotation players, but if Brown looks to stick in Miami, he'll have to rededicate himself on that end.  He averages 1.4 steals per 36 minutes for his career, jumping passing lanes and finishing on the other end, but his gambling can often have negative consequences. The Phoenix Suns were just a hair better with Brown off the court than they were with him on.

Despite having some success as a Sun, Brown hardly played last season, only being offered 10-day contracts with San Antonio and New York. With his stock that low it makes sense that Miami hasn't guaranteed Brown's deal.

Brown will have his work cut out for him if he wants to make the roster. He'll likely be competing with Reggie Williams for whatever minutes he can scrape as a shooting guard. Brown has a much higher pedigree than Williams (two NBA Championships with the Lakers), but both players are currently on non-guaranteed deals, so it's just as likely neither make the team.