Theme Day: Best thing about games could be who you see it with

Live sporting events could be transformative events, careers made or ruined with a game-winning shot or lasting injury. Or sometimes it's just about enjoying a soft pretzel (definitely no mustard), learning how to spell "Udonis" and searching the stands for Burnie to make it a once-in-a-lifetime experience.

Share All sharing options for: Theme Day: Best thing about games could be who you see it with

Like many opportunities in life, you only get one chance at it. There's only one first day at school, one first date with your spouse-to-be and, for a rabid sports fan, only one first trip to take a child to a Miami Heat game.

I wish I could tell you that the game was remarkable and that there was a moment where we witnessed the kind of play that people will be talking about for years to come.

Well, it wasn't and that moment didn't happen but, for me, it was still a memory I'll cherish forever.

The game itself was meaningless, a Tuesday night affair against the woeful Detroit Pistons. Miami won easily and I can tell you that I didn't stay the whole game...six-year-old girls have an earlier bedtime than most fourth-quarter endings, especially on a school night.

But everything else leading up to the game was a glorious spectacle, the chance to see things through young eyes. It's the gift of youth that only the very luckiest adults hang on to, where you can appreciate the littlest of things because you've never seen them before.

You board Miami-Dade County's MetroRail and you look past the grime and stupid graffiti tags written in Sharpie because you're on a train, one that magically stays floating high above the ground. Each station you watch as people get on and off the train, creating new stories that establish a connection with each passenger ("Look, she's going to school just like you do!", "That man's tired after a long day of work..."). You soar over palm trees and watch the twinkling lights of U.S.1, pointing out the simplest of landmarks, mostly restaurants, to help establish relevance.

All the while, you watch as beautiful, big brown eyes drink it all in, savoring each experience and sight with an amazing thirst.

The short walk to the AmericanAirlines Arena is exciting in a way it's never been before, walking in small packs of pedestrians across downtown streets that normally seem gray and decaying. Lights shine as you weave in and out of traffic, and vendors can be heard yelling the too-expensive prices for convenient parking. Smells of unknown meats grilling somewhere waft over the cars' noxious fumes. But for her, it's all good; she can't differentiate what's supposed to be part of the show and what's merely overlapping noise.

Finally, we see it, the Arena itself, glowing just ahead of us. She waves at a police officer that helps us cross an insanely-busy Biscayne Boulevard, holding hands with me even as they grow just a little sweaty with anticipation. The steps leading to the AAA seem insurmountable but she faces it with gritty determination. We walk to the door and she proudly displays her ticket, feeling more adult as a result. We each get a program but, alas, no free giveaways tonight.

It doesn't matter, of course, with memories like these much more important a keepsake than a plastic bauble made in China.

Everything is a story as we make our way around the building, from stopping to appreciate each picture ("That's LeBron James...you've heard of him, haven't you?") to looking at every concession stand along the way, appreciating the variety of arena foods - pizza, hot dogs, popcorn - like only a child can.

We get there early enough and "sneak" our way down to the lower level (I throw on the charm as heavy as I can to the usher...only to have my daughter's eyes get the job done in less than a second). There, we watch players warming up, shooting and stretching. It's all too much for her to take in but not for lack of trying...she simply doesn't know what to look for. How can she appreciate a Ray Allen 3-pointer any more than the camera crews filming a short segment along the baseline?

Eventually, we make our way to the upper level seats, stopping for the previously-mentioned soft pretzel along the way. That choice was not an easy one to make but, she wasn't hungry (I, however, was starving) but she wanted to share something with me...she wins out over my hunger every time. I even happily make the concession not to add mustard ("It's too spicy!" she says through her missing front tooth).

Waiting for the game to begin, we leaf through the program. Looking at each player's weight, height...even their respective alma maters...these stats become an unbelievable source of entertainment (Perhaps a future in analytic analysis awaits?).

Soon, the national anthem echoes across the arena, and she's enthralled with the singer, a local high school girl, and I tell her that she could be down there some day, too. I beam at her as she solemnly places her right hand over her heart.

As the pregame introductions begin, she claps for every name both Pistons and Heat players alike, and I can't stop her no matter how much the fan in me wants to. When the action starts, she disconnects a little...I try to explain what's going on but Miami's 13-4 run isn't as interesting as the possibility of seeing Burnie, the Heat mascot, bobble his way around the arena.

We watch the Heat dancers during time-outs, although I don't remember the routines being quite as racy as they are tonight sitting next to my little girl. Halftime comes and goes - a half-court shot falls well short despite my daughter's intense pleading - and then it happens.

Burnie is only five feet away from us.

He didn't come over, merely waving as he carefully made his way past us, up the steps into the nosebleeds to make some other kid's night a complete success. But she gushed and stared at him, this neon orange Santa Claus in size 45 sneakers, and watched in awe as he eventually descended into another section and down the tunnel, out of view.

The Heat had a big lead midway through the third quarter and her yawns grew more and more frequent and there was still a short walk in the breezy downtown night ahead of us. She said good-bye to the AAA as I walked down the steps, carrying here tired body in my arms.

On the train ride back, we went over all the things we saw, and she, between yawns, displayed a little twinkle as she recounted the things that stood out.

As she fell asleep in her bed later that night, smelling of mint toothpaste and just a hint of buttered popcorn, she thanked me for taking her and told me the words that made it all worthwhile:

And this is what makes sports special and memorable, not just because of what happens on the field or on the hardwood floor. Not because of that big shot or that incredible catch as time expires...but because live games bring people together in a way than very few, if any, experiences can. Where you can cheer and exchange high-fives with perfect strangers, where you can yell at the players you hate the most and hope - nay, know - that your scream is why they missed that free throw in the fourth quarter.

But sometimes you get lucky and get to have a special moment with someone special, someone you really love, and share a memory that neither of you will ever forget.

And you might even get to see Burnie, silently bouncing his way around the stadium, making children's silly dreams come true. 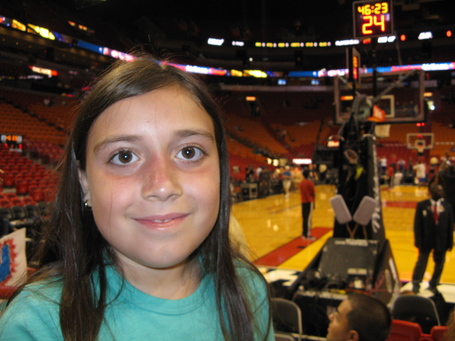