Despite only having two games, the front office was busy, pulling the trigger on a surprising trade, and issuing a suspension while the players mustered up a couple of wins in a eventful week for the Heat.

Share All sharing options for: Weekly Heatcap: Short, yet eventful week for Heat

On a day that was anticipated for a while, a series of events would have fans disappointed and turned the other way. Tuesday night was supposed to be the day the city of Miami got to see the all-time great, Kobe Bryant, play one last time in the Triple A. Instead, Kobe would sit the game out with a back injury. But that’s not just what caused the dismay.

Hours before the game Miami traded longtime guard, Mario Chalmers, and James Ennis to Memphis for Beno Udrih and Jarnell Stokes. A trade centered primarily on tax relief, the Heat pulled the trigger on a much-rumored proposal. While fans have felt divided on the trade, Chalmers was a proven starter on two championship teams and played the fourth most games in team history behind Wade, Haslem and Mourning.

Prior to the start of the game, the Heat released a statement on Gerald Green, who missed the past few games for unknown reasons. The Heat suspended Green two games for "conduct detrimental to the team" that led to his hospitalization last week. A police report would confirm that Green punched a man in the right eye and was handcuffed by authorities. His suspension would start against the Los Angeles Lakers Tuesday night.

The Heat got off to a quick start against the Lakers, going on a 20-10 run to open the game before closing the quarter with a 29-23 lead. With Kobe in a suit, Nick Young felt free to let it fly and he did. Young hit four threes, having 14 points in the second period to put the Lakers ahead. Bosh had it going all night, putting the Heat up by one, 50-49, before the half closed. Whiteside already got his double-double in 18 first half minutes.

Whiteside continued to dominate in the second half. He did all his damage in the third and didn't need to play in the fourth. Wade struggled from the field but was able to hit a couple shots to bump the lead up for the Heat. Solid play from the starters helped the Heat outscore the Lakers in the third, 25-17.

A beneficiary of the Chalmers trade, Tyler Johnson had a dazzling crossover and layup with the foul to get the Heat crowd going to open the fourth. The play had fans forgetting Chalmers was ever traded. Bosh would play his best basketball of the season in the fourth as the power forward finished with a big 30 point, 11 rebound game to lead the Heat over the Lakers, 101-88.

Miami’s defense is what made the difference all game long. The Heat out-rebounded the Lakers, 47-36, while forcing 17 turnovers compared to the Heats mere 10. The largest difference came from the team’s centers. Whiteside’s 19 points, 15 rebounds and 3 blocks had Roy Hibbert (2 points, 2 rebounds) being overpowered the whole night. 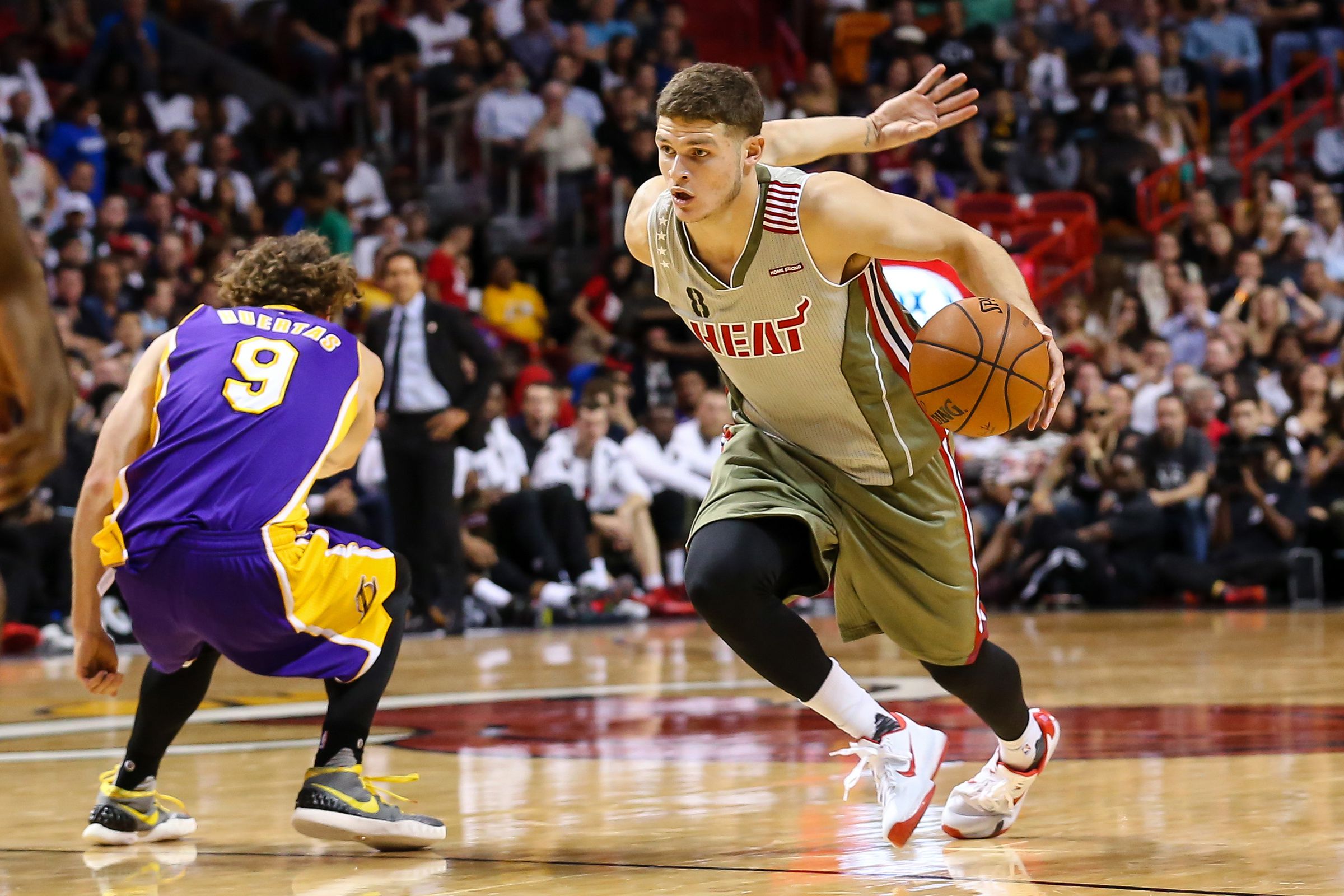 Before squaring up with the Utah Jazz Thursday night, coach Erik Spoelstra told the media Wade would not play because his son, Zion, was in the hospital. The open shooting guard slot went to Heat rookie Josh Richardson, who got his first career start. Richardson got off to a great start, having 8 of Miami’s first 14 points. The game was close throughout the first two quarters with Miami leading 46-45 at the half. Gordon Hayward led the Jazz with 16 points and 6 rebounds.

Whiteside and Derrick Favors traded blocks in the third, both reaching 5 in the quarter. Bosh, Dragic and Johnson picked up the offense for the Heat while Favors and Burks kept the Jazz attacking and in the game. Heading into the fourth the game was tied 66-66. Miami opened the final quarter on a 13-4 run behind buckets from Bosh and Winslow. Favors intensified his play as the period came to a close but a Bosh block on the Jazz big man with 22 seconds left and a couple clutch jumpers from Tyler Johnson sealed the game for the Heat as they topped the Jazz 92-91 for their third straight win.

Bosh led the Heat with 25 points, 8 rebounds and 4 blocks. Tyler Johnson also played well with 17 points on 8/12 shooting. Although Whiteside only had 9 points he got it done on the defensive side again with 14 rebounds and 5 blocks. Overcoming Favor’s strong game(25 points, 12 rebounds, 7 blocks) was a great challenge for the Heat big men and ultimately gave the Heat the W.

Green’s self-led absence is not what the Heat needed at the beginning of the season, especially as the team tries to find consistency with different lineups and changes. The emergence of Johnson has been a meaningful bright spot for the Heat. His role as well as Richardson will expand with the departure of Mario Chalmers as the team invests in its younger guards. Because of the 4 day hiatus between games, Miami has had plenty of time to practice with a fully armed team. Green and newcomers, Udrih and Stokes, were able to participate in practices as they get integrated in the Heat system.

Most of the team also gathered together at Wade’s event, A night on the RunWade, this past Saturday, balancing the work and fun, for some team bonding.

The Heat will continue their homestand this week against the Minnesota Timberwolves Tuesday (7:30 PM), Sacramento Kings Thursday(7:30 PM) and Philadelphia 76ers Saturday (8:00 PM).