Waiting on the Chris Bosh decision

The announcement of whether Chris Bosh suits up this season may come sooner rather than later.

Share All sharing options for: Waiting on the Chris Bosh decision

Time stops for no one as training camp begins less than three weeks from today, and the NBA season officially tips off a month after that. Until the status of Chris Bosh is resolved, one way or the other, the Miami Heat can’t make definitive plans for the upcoming season.

Do you expect Bosh will be back? Or not?

Either way Pat Riley has done a far better job than anyone gives him credit for in preparing the Heat for whatever the eventual decision regarding Bosh is made for the upcoming season.

For example, Justise Winslow at only 20 years-of-age, looks poised to greatly increase his contributions on offense with an improved jump shot. Hopefully Tyler Johnson remains healthy all season to battle for Dwyane Wade’s minutes. Josh Richardson proved how skilled he was last season, and has the talent to produce as a guard or forward: truly a positionless player.

Riley managed to bring aboard a former number 4 pick in Dion Waiters and number 2 pick in Derrick Williams. Waiters converted at a 50% rate on drives to the basket, but only 25% on paint touches. With Waiters on the court, a key role for Hassan Whiteside could be to clear the driving lanes for Dion and get put-back points on misses for himself.

Williams strengths and weaknesses are very different from Waiters. His shot chart from 2015-16 reveals he had over 200 FG attempts from areas he averaged a 25% success rate. 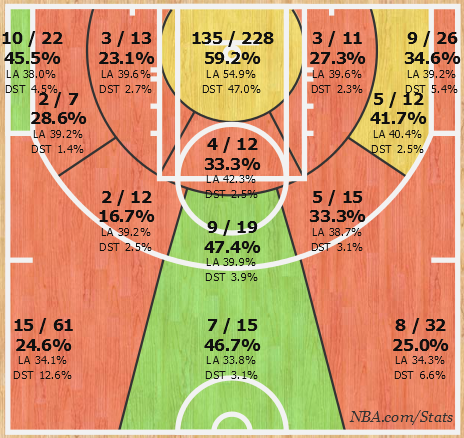 He can be potent from the corners and around the rim, but Knicks' fans cringed when he made attempts from elsewhere on the court Getting to his sweet spot on the court and optimal shot selection remains a top priority.

Luke Babbitt and Wayne Ellington have proven scorer skills to space the floor, much more than last season’s team, which won 48 games and a third seed. With Whiteside and Goran Dragic back, this year’s squad surrounding them appears more balanced than the previous one. What the Heat lost in star power, they made up in a deeper rotation built for the 82-game regular season.

Add to the mix James Johnson, Willie Reed, Beno Udrih, Udonis Haslem, Briante Weber, Rodney McGruder, Okaro White, and company, Miami resembles the Sioux Falls Skyforce with their balanced approach and focus on winning as a team. Having assistant coach Dan Craig on the staff to show the players how he guided the Skyforce to a NBA D-league record 46 wins, is a factor few commentators take into consideration.

However, detailed preparations for the season can’t start in earnest until Bosh's teammates and coaches know whether he will or will not be available. The answer should arrive shortly.